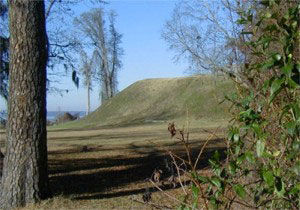 Located off I-95, and Hwy's. 301/15 on Secondary Road 803 - 9 miles SW of Summerton - the Fort Watson location was originally the substructure base for an Indian temple dating back to the late prehistoric period. (between A.D. 1200 - A.D. 1400).This site is the largest ceremonial center yet discovered on the coastal plain. The mound because of its strategic location, was used by the British Colonel John W. T. Watson to build a fort on the banks of Scott's Lake during the American Revolution. From this point they could control movement on the Santee River as well as the main road between Charleston and Camden. On April 15, 1781, General Francis Marion and Lt. Col. Henry "Lighthorse Harry" Lee encircled the fort . After 8 days of futile small arms fire, Major Hezekiah Maham constructed a pine tower of sufficient height to overlook the stockade. Therefore, on April 23, 1781, the Americans mounted an attack from the tower and from the ground which lasted only a short time, making this the first post in SC to be retaken from the British. It was a small fort but contained a storehouse, hospital and a "covered way" to a water source.