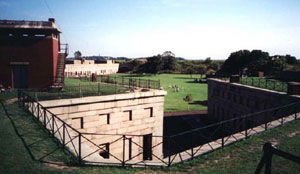 Fort Warren, located on George's Island in Boston Harbor, is a former Civil War prison and continued to be a harbor defense fort for many generations. Today the fort is maintained by the Metropolitan District Commission (MDC) and is the centerpiece of the Boston Harbor Islands, a national park area. The fort is situated on a 28-acre island at the entrance to Boston Harbor where it once protected the main shipping channels.

Started in 1833, Fort Warren belonged to the federal government until 1958, when the state obtained possession.

Famed historian Edward Rowe Snow told many tales about Fort Warren and some of his stories are featured on this Web site. Mr. Snow was one of the leaders in preserving this fort for generations to come. Today, more than 100,000 people visit the fort each summer.

Many years of neglect have taken its toll on the fort. Some portions of the fort have been restored, yet others are still off-limits to tourists.