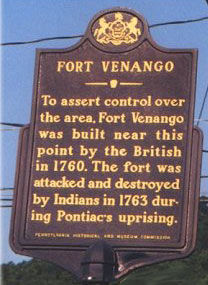 The purpose of Fort Venango was to protect the passage from French Creek to the Allegheny River. The British intended for it to replace Fort Machault, which the French had destroyed when they retreated from the Ohio Valley in 1759.

On Aug. 9, 1760, Major Robert Stewart arrived to erect Franklin's second fort, Fort Venango, nearer the mouth of French Creek. It was one of the forts in a chain for which Fort Pitt was the general headquarters. The great Indian chieftain Pontiac saw that settlers and land speculators continued to push westward and feared the eventual destruction of the Indian way of life. In 1763 all the western Indian tribes joined together in the Indian War known as Pontiac's Conspiracy and attacked all the posts west of Lake Erie simultaneously. Nothing remained of Fort Venango but piles of smoldering embers. The British Army never returned." Text from "Walking Tours of Historic Franklin, Franklin Rotary Club", 1990.

For many years afterwards the ruins of Fort Venango plainly indicated its destruction by fire.