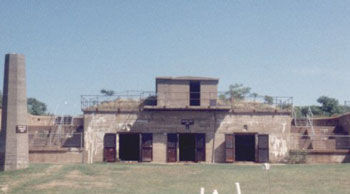 Fort Stark is one of seven forts built to protect Portsmouth Harbor. The others in New Hampshire are: Fort Washington, Fort Constitution (William and Mary), and Fort Dearborn (Odiorne Point State Park), and in Maine: Fort Sullivan, Fort McClary and Fort Foster.

The earliest forts were built to protect the colonists. As Portsmouth Harbor's importance increased with its Revolutionary War shipbuilding industry and the establishment of the Portsmouth Naval Shipyard in 1800, additional fortification was needed.

At Jerry's Point there is evidence of earthwork fortification, circa 1842, and a stonework fort, circa 1873. Following the Spanish American War (1898) the improved defense of key harbors became a national priority. Fortifications such as Fort Stark were constructed on both coasts during the Endicott Period (1890-1920) and at Forts Constitution, McClary and Foster. The basic defense concept was to mine the harbor entrances and erect gun batteries. No shots were ever fired in anger.

The final coastal fortification occurred during World War II (WWII) when batteries were added to Fort Foster, and Fort Dearborn was constructed. The five remaining forts are obsolete and today are considered historic sites or parks which are open to the public. Following World War II the navy took over the army installations and used Fort Stark primarily for reserve training until the property was deeded to the state of New Hampshire in 1978 and 1983.

Fort Stark State Historic Site is located on a peninsula historically called Jerry's Point on the southeast corner of New Castle Island. It overlooks the Piscataqua River, Little Harbor and the Atlantic Ocean. Fort Stark was named in honor of John Stark, commander of N.H. forces at the Battle of Bennington (1777).

A visitor center, located in the old mines building, is open by appointment only. Arrangements to have it open may be made by calling the N.H. Division of Parks and Recreation's East Region staff at 603/436-1552 prior to a visit. A walking trail traverses the ten-acre fort site. There are no camping facilities.

Route I-93 & I-95 are the gateway highways to New Hampshire.

From I-93:
To Route 101 east to I-95 to exit 5 to 1 By-Pass south to Route 1 south to 1A south. Cross the Sagamore River Bridge, and take a left onto Wentworth Road. Go past the Wentworth by the Sea Hotel, take a right onto Wildrose Lane. Fort Stark State Historic Site is at the end of the dead end road. Park only in a parking space.

From I-95:
Take exit 5 to 1 By-Pass south to Route 1 south to 1A south. Cross the Sagamore River Bridge, and take a left onto Wentworth Road. Go past the Wentworth by the Sea Hotel, take a right onto Wildrose Lane. Fort Stark State Historic Site is at the end of the dead end road. Park only in a parking space.