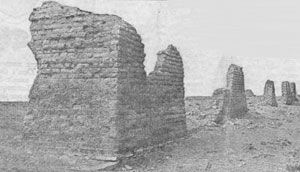 Fort Smith was established on August 12, 1866, to protect immigrants traveling on the Bozeman Trail from attacks by the Sioux Indians. The Bozeman Trail crossed the Bighorn River 400 yards from the fort. Located near the present town of Fort Smith, all that remains of the site are low mounds and interesting stories. The site is on private land and visitors may see it by making prior arrangements at the Yellowtail Dam Visitor Center.

On a bluff a short distance from the Big Horn river a mile or two below the mouth of the hundred-mile canyon, are a few segments of an adobe wall, all that remains of old Fort Smith, one of the three forts which the government built in 1866 to protect the Bozeman trail to the Montana gold fields and abandoned two years later, confessing its defeat by the wily Sioux chieftain, Red Cloud.

Once the scene of feverish activities of soldiers, wood-choppers, and traders, the rendexvous of noted scouts, and the haven of caravans of gold seekers, freight carriers, there are now only these crumbling walls to distinguish it from other sparsely inhabited areas of grazing lands on the Crow reservation.

In the year 1865, Gen. Patrick Conner conducted an expedition into the Powder river country and built a fort south of the present Buffalo, Wyo. Details of his troops were attacked and invasion was greatly resented. When the decision of the government to protect the route by building forts and establishing military posts and patrols was made known, Red Cloud, the Ogallala Sioux leader, ended the parley by an open declaration of war against the United States.

Col. H.B. Carrington was placed in command of the force, consisting chiefly of the 18th infantry, about 700 men in all, which was to build and man the string of forts. Conner's fort was reconditioned and named Fort Reno. The central fort, called Fort Phil Kearney, was built in the shadow of the Big Horn mountains on Little Piney creek, a few miles south of the present city of Sheridan, Wyo. It bore the brunt of the Indian attacks.

Col. Carrington and his men started on their expedition in May but it was not until August that he was sufficiently entrenched to send two companies under the command of Brevet Lieut. N.C. Kinney to establish the third fort at the crossing of the Big Horn. A fourth fort which was to have been placed at the Yellowstone crossing was never built.

The abandonment of the trail had important bearing on the history of both Montana and Wyoming. The people of Bozeman who had benefited greatly by the trade which its strategic position on the trail gave them, now bent their energies to opening up the alternative route by way of the Yellowstone in competition with the long Missouri route by way of Fort Benton and the Overland and Oregon trail route which brought the caravans by a circuitous way, doubling back from Idaho to Virginia City.