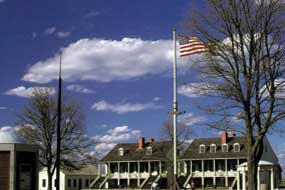 The U.S. Army established Fort Scott in 1842 to protect the Permanent Indian Frontier. American Indian/non-Indian relations during the 1840s were relatively peaceful. Troops participated in the Mexican War and mission of exploration, and they functioned as escorts in the far west.

Fort Scott was abandoned by the U.S. Army in 1853 as the frontier moved westward. The buildings were sold at public auction in 1855 and became the town of Fort Scott. This was the end of the fort but not of the military presence in the area. Bleeding Kansas, the Civil War, and land squabbles in the 1870s brought the U.S. Army back as violence and turmoil periodically plagued the area until 1873.