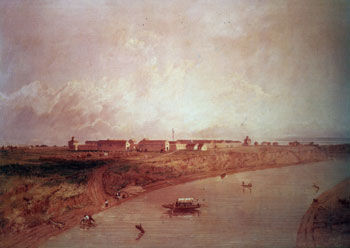 Fort Rice State Historic Site -- Located eight-tenths of a mile southeast of the town of Fort Rice, this site preserves remaining vestiges of a military post established in 1864 by General Alfred Sully to supply his campaign into western Dakota and to protect traffic on the Missouri River, a function the fort continued until replaced by Fort Yates in 1877. There is a marker on the site.

Established during the Sioux campaigns in 1864 on the western bank of the Missouri River, Fort Rice had a brief and uneventful life as an Army post. The Secretary of War named the fort for Brig. Gen. James Clay Rice, who had been killed in Virginia in May 1864. The original buildings, cottonwood logs with sod roofs, were built by the 30th Wisconsin Infantry. In 1868 the post was rebuilt; the original buildings were destroyed and new ones erected on their sites. The new fort was a quadrangle, 864 by 544 feet, surrounded by a 10-foot-high stockade. By 1875 the post included 4 company quarters, 7 buildings for officers, a hospital, a bakery, 5 storehouses, a library, a magazine, and a guardhouse. There were corrals, stables, and another storehouse outside the stockade.

Although the Inspector General reported in 1872 that the post was "generally very healthy," in 1870 the Surgeon General had portrayed the area surrounding Fort Rice as being "generally sterile, and sparsely timbered and watered. . . . Drought is one of the chief difficulties, but not the only one--for what the drought spares, the grasshoppers are apt to devour."

By 1878 Fort Rice had outlived its usefulness, and the Army abandoned it. In 1884 it was turned over to the Interior Department. Today part of the site is a state park that included several reconstructed buildings from the fort.

28 July 1865, Fort Rice, North Dakota: The U.S. government made hostile tribes a number of peace offers in 1865, but fiery leaders such as Sitting Bull refused the gestures. At Fort Berthold, Sitting Bull slashed himself with a knife to show the wavering warriors how the soldiers at Fort Rice had cut him while trying to kill Indians who came near the fort. He then recruited nearly 400 warriors to attack Fort Rice.

As soon as the Lakotas gathered on the hills, Lt. Col. John Pattee of the 6th Iowa Cavalry, in charge at the post, led his men out. Four companies of the 1st U.S. Volunteers, two companies of the 4th U.S. Volunteers, and one company of the 6th Iowa Cavalry made a long line that curled around the stockade walls. Sitting Bull's warriors charged in, shooting arrows at long range. Pattee's men responded with musketry. When the howitzers were put into action, the Lakotas lost their enthusiasm. The three-hour, long-distance fight favored the soldiers' weapons, assuring victory as long as they kept their lines and did not rush out in response to Indian taunts. The discouraged Lakotas finally melted away. After Sitting Bull's terrible performance, some angry warriors flailed him with horsehide whips.

Probably a dozen warriors died in the battle. Two soldiers were killed and three wounded.