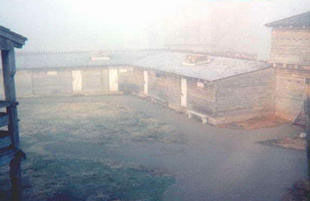 Under the direction of William Clark, joint commander of the Lewis and Clark expedition, 80 volunteer dragoons from St. Charles and the regular garrison under the command of Captain Eli Clemson, erected the Fort in 1808 to serve several purposes. It functioned as an outpost in the newly acquired Louisiana Purchase, housing soldiers to guard the new territory and to protect the United States Factory Trade House there. Fort Osage also aided the American government in befriending the area's Osage Indians. Finally, the Fort offered Missouri's first settlers a sanctuary from which to venture westward.

Under the direction of George Sibley, trade flourished at the Fort, and relations with the Indians grew stronger. The Factory, a three-and one-half story high trade house, reflecting French Colonial architectural style, was one of the few operated by the U.S. government without financial loss. In keeping with the old legal term, Sibley served as the Fort's "Factor", keeping track of the dollar value of each exchange. By 1822 however, private traders who resented the Fort's competition lobbied Congress to end the Factory System. Because the lobbying proved successful and because settlers pushed the frontier further west, both traders and soldiers abandoned the Fort by 1827.

In 1941, the Jackson Country Court, with the support and cooperation of the Native Sons of Kansas City and other local organizations, undertook to locate and reconstruct the Fort. James Anderson, historian for the Native Sons, and George Fuller Green, architect for the construction, led an extensive research into the history of the Fort. This effort culminated in the dedication of Blockhouse No. 1 in September 1948. The Factory building and the remaining four blockhouses, officer's quarters, soldier's barracks, and surrounding log stockade were completed in the 1950's and 1960's.

Fort Osage was recognized as a National Historic Landmark in 1961. It is listed on the National Register of Historic Places as an archaeological district because of significant Hopewell and Osage Indian sites neighboring the Fort. The National Park Service also designates Fort Osage as a certified site of the Santa Fe and Lewis and Clark National Historic Trails.