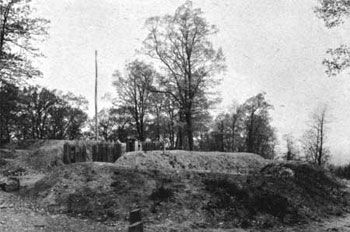 1777 (Now Reconstructed). Continuing from the south end of Court Street is a road leading upward into the Fort Nonsense area of the park. There, at the top of a steep hill (the northern terminus of Mount Kemble), visitors may see a restored earthwork originally built at Washington's order in 1777.

How the name "Fort Nonsense" came into being is unknown. It does not appear in any available written record before 1833, nor has anyone yet authenticated the oft-repeated story that the Commander in Chief's reason for constructing this work was merely to keep the American troops occupied and out of mischief. Washington's real intention is disclosed by an order of May 28, 1777, issued as the Continental Army moved to Middlebrook (p. 11). In this he directed Lt. Col. Jeremiah Olney to remain behind at Morristown, and with his detachment "and the Militia now here . . . Guard the Stores of different kinds . . . Strengthen the Works already begun upon the Hill near this place, and erect such others as are necessary for the better defending of it, that it may become a safe retreat in case of Necessity." Other orders confirm the conclusion that Fort Nonsense was actually built to serve a very practical purpose.

As years passed, the original lines of this earthwork gradually crumbled away. Their present appearance is the result of research and physical restoration work completed by the National Park Service in 1937.