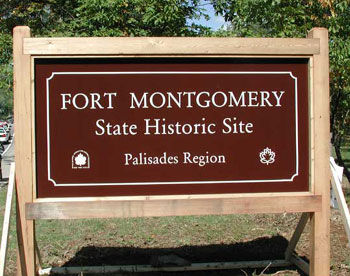 Fort Montgomery was the scene of a fierce Revolutionary War battle for control of the Hudson River. Visitors today can tour the remains of the 141⁄2-acre fortification, perched on a cliff overlooking the magnificent Hudson River. Fort Montgomery State Historic Site is not a reproduction fort; it is a genuine vestige of our nation’s struggle for independence. Visitors will see the actual stone foundations of the fort’s buildings and remains of the fort’s earthworks.

In October 1777, a British fleet sailed up the Hudson River from New York City in an attempt to help General John Burgoyne’s army, surrounded by the Americans at Saratoga. But the British could not get up the river without capturing Fort Montgomery and it’s nearby sister fort, Fort Clinton. They attacked the forts on October 6, 1777. The Americans, outnumbered 3 to 1, fought desperately until driven out of the forts at the points of the British bayonets. About 50% of the American forces were killed, wounded, or taken prisoner. The victorious British destroyed the forts and sailed north, but they were too late to help General Burgoyne. His surrender at Saratoga was the turning point of the Revolutionary War.

Archeologists have revealed many of Fort Montgomery’s remains, including the stone foundations of barracks where the troops lived, the ruins of the powder magazine blown up by the British after the battle, and the eroded walls of the North Redoubt, where patriots and loyalists fought hand-to-hand. Interpretive signs, an audio tour, and group tours (by appointment) explain these remains and help visitors imagine how the fort and the battle may have looked. There is a spectacular view of the Hudson River from the Grand Battery, where, in 1777, massive 6,000-pound cannons guarded a giant iron chain across the river.

Hikers will enjoy the walk to a beautiful new suspension footbridge that crosses the Popolopen Creek. The trail continues to the Trailside Museums and Zoo (the former site of Fort Clinton), Bear Mountain State Park, and the Appalachian Trail.

From New York City: take Palisades Parkway North to the end. At the rotary, take the exit for Route 9W North. Go 6/10 of a mile to the Fort Montgomery parking lot, just past the Trading Post restautant.

From the New York State Thruway (I-87): At the Harriman Exit (Exit 16), get on Route 6, following signs for Bear Mountain State Park. At the first rotary, continue on Route 6 / Palisades Parkway North. At the next rotary, take the exit for the Route 9W North and follow directions above.

Fort Montgomery is open daily, from dawn to dusk, year-round. Admission is free.

Tours of Fort Montgomery are self-guided. Illustrated signs explain the fort’s history and its archeological remains. Group tours led by an interpreter are available by appointment.

Audio tours are available by appointment from April to October. Audio users can choose from a menu of topics, adjusting the tour to their own interests. Topics include military history, archeology, daily life at Fort Montgomery, and Fort Montgomery’s personalities. Audio tour rentals are $4.00 for adults, $3.00 for children (12 and under), and $3.00 for groups of 10 or more.