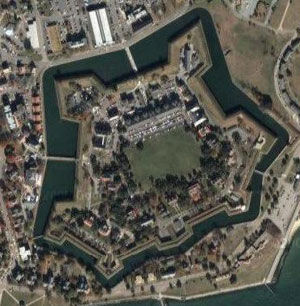 Fort Monroe, Virginia (also known as Fortress Monroe ) is a military installation located at Old Point Comfort on the tip of the Virginia Peninsula at the mouth of Hampton Roads on the Chesapeake Bay in eastern Virginia in the United States. (757)-788-3391

The current moated irregular hexagon-shaped stone fortress is the largest in the United States. (Fort Jefferson in Florida is bigger in height and potential armament). This National Historic Landmark was named after President James Monroe, and was designed to hold 200 guns (380 were originally called for). With the addition of the Water Battery casemates the number increased to 412. It was garrisoned in 1823 and has been continuously occupied since then. Prior to 1832 the official name was Fortress Monroe. Construction was completed in 1834. This is one of four southern permanent forts that was never taken by the Confederacy.

Fort Monroe's Casemate Museum is open from 10:30 a.m. to 4:30 p.m., 7 days per week. Admission is free and the facility is handicapped accessible.

Guided tours for pre-formed groups of 10 or more (school groups grade 3 and above) are available with a two-week notice.