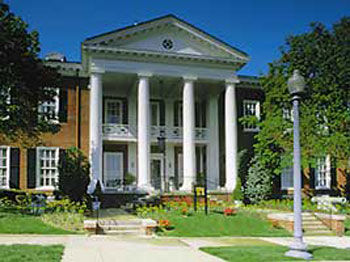 Fort Lesley J. McNair, located at the point of the Potomac and Anacostia Rivers in Washington, D.C. has been an Army post for 200 years, second only to West Point in length of service. The military reservation was established in 1791. Major Pierre C. L'Enfant included it in his plans for Washington as a major defense site for the city. An arsenal first occupied the site and defenses were built in 1794. Fort McNair has been the headquarters of the U.S. Army Military District of Washington since 1966 and home of the National Defense University since 1977. Other units on post are the 67th Explosive Ordinance Detachment and a platoon of the MDW Military Police Company. Fort McNair is the home of several general and flag officers, and by tradition, the Army's number two officer, the Vice Chief of Staff.

Fort Lesley J. McNair stands upon the site where city designer, Maj. Pierre C. L'Enfant, positioned a military garrison. Located where the Anacostia River empties into the Potomac, the post reveals a past with much interest, tragedy and mystery. Fort McNair has been in continuous use as a military reservation since 1791 and is one of the oldest posts in the United States. The original reservation consisted of approximately 28 acres and was known as Turkey Buzzard Point, and later as Greenleaf Point. Within a few of years "The U.S. Arsenal at Greenleaf Point" grew gradually from a modest acreage to more then 89 acres.

During the War of 1812, because of its position, the arsenal was not an effective defense against the British. The arsenal was destroyed when powder hidden in a well was accidentally ignited, killing or mangling a small unit of British soldiers.

In 1826 land just north of the arsenal was purchased as the site for the first federal penitentiary. The accused conspirators in the Lincoln assassination were imprisoned there and after trial were executed. Mary Surratt, one of the accused, was the first American woman to be executed by federal order.

From 1898 until 1909 a general hospital, the forerunner of Walter Reed Army Medical Center, was located there. Maj. Walter Reed, perhaps best known for his contributions to the discovery of the cause of yellow fever, did much of his research there. The post dispensary and the Inter-American Defense College bachelor-officer's quarters now occupy the buildings in which Reed worked and died.

In 1948, the post was renamed to honor the commander of the Army Ground Forces during World War II, Lt. Gen. Lesley J. McNair, who was killed at Normandy by friendly fire July 25, 1944. He was the highest-ranking officer in the U.S. armed forces to die in that manner. At the time of his death, his headquarters was on Fort McNair. McNair was promoted to full general posthumously.

Fort McNair is home to the National Defense University, established in 1976, which is the parent organization of three colleges on the post and one in Norfolk, VA.

The first is the National War College, which was first established as the Army War College in 1901 and reorganized as the joint Army-Navy Staff College in 1943. The college not only was highly successful as a wartime venture, but also served to broaden the horizon of thinking on the postwar structures of our higher military-educational system.

The Industrial College of the Armed Forces is the second school on post. It had its origin in the Army Industrial College, founded in 1924 to prepare officers for top-level posts in the future wartime supply organization and to study the problems of industrial mobilization.

Part of the university, but not on Fort McNair is the Armed Forces Staff College. Established in 1946, the Staff College prepares selected officers for joint and combined duty.

In addition to the colleges and MDW, soldiers of Company A, 3rd U.S. Infantry, known as the Commander-in-Chief's Guard, call Fort McNair home. This Old Guard element wears the colonial uniform during Army reviews and performs drill under the rules of Von Steuben's "Blue Book." Also assigned to the post are the 767th Ordnance Detachment (Explosive Ordnance Disposal); Headquarters, 1101st Signal Brigade and a platoon from the Fort Myer Military Community Military Police Company.