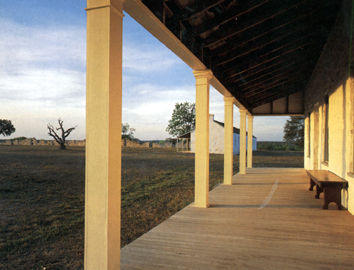 A self-guided trail leads to the military lime kiln and "Government Springs." Picnic tables are available for day use. 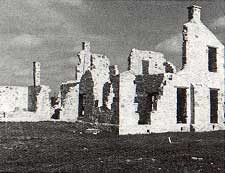 Photo of the ruined commanding officers quarters taken by Charles M. Robinson, III from the book, Frontier Forts of Texas.

This fort was established on March 14, 1852, by the United States War Department as a protection to frontier settlers against hostile Indians. Named in honor of Captain Henry McKavett who fell at the Battle of Monterrey, September 21, 1842. Evacuated by Federal troops, March 22, 1859. Reoccupied April 1, 1868. Abandoned June 30, 1883.

The fort was blessed with a natural spring and lagoon, providing it with an unending supply of water, which accounted for the fact that unlike most posts, it regularly maintained a bountiful post garden. Its location in the hill country provided it with an abundance of timber and stone for construction. General Sherman once called it "the prettiest fort on the frontier." 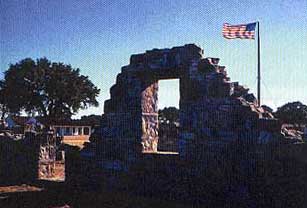 Indian activity in the region was not heavy during the 1850s though a brief rise in hostile raids in the spring of 1854 and continued activity into 1855, occupied the post's companies. Comanche chiefs Buffalo Hump, Sanaco, Ketumseh, and Yellow Wolf frequently honored the post with a visit, but Comanches caused less trouble here than at Fort Chadbourne during the 1850s. Military patrols and scouting parties were regularly deployed in the field to monitor Indian activity in the region between the Llano and Concho Rivers. In later years of the decade, hostile Indian activity in north Texas demanded a corresponding redeployment of troops northward. This shift resulted in the closure of Fort McKavett in 1859. More