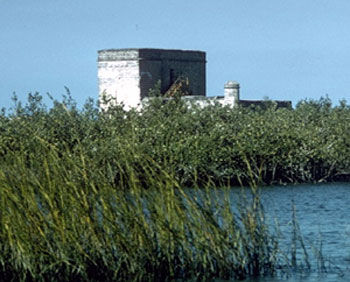 Throughout its history, the story of Fort Matanzas has been closely intertwined with that of the city of St. Augustine and the neighboring structure which served as the city's defense for many years, the Castillo de San Marcos. Located fourteen miles north of Fort Matanzas, St. Augustine and the Castillo serve as outstanding reminders of the might of the early Spanish empire in the New World. Select from the buttons above to learn more about the significance of these two destinations in the story of our country.

Fort Matanzas represents a very well-preserved masonry watchtower fort built by the Spanish from 1740 to 1742. The tall tower provided a perch to observe vessels approaching St. Augustine from the south, and the cannon blocked potential enemy advancements up the Matanzas River, the backdoor to St. Augustine.

In 1565, almost 200 years before construction began on the fort, another story was played out at the Matanzas Inlet--the massacre of the French Huguenots. A large French force under Jean Ribault had left their settlement of Fort Caroline in Spanish-claimed territory near present-day Jacksonville to attack the Spanish at their new settlement of St. Augustine (San Agustin).

A storm shipwrecked the French fleet farther south. When the Spanish discovered the French on the beach, they ordered them to surrender, give up their Protestant faith, and accept Catholicism. Being without weapons or food, they did surrender, but renounce their faith they refused to do. So the Spanish massacred nearly 250 Frenchmen as heretics near the inlet which was then appropriately named "Matanzas", the Spanish word for massacre. This confrontation began 235 years of Spanish control in Florida.

Fort Matanzas National Monument is open to the public from 9:00 a.m. to 5:30 p.m. every day of the year except December 25th. The ferry to the fort leaves the Visitor Center dock 9:30 to 4:30 on the "thirty".The ferry is usually out for service the first Wednesday and Thursday of each month.

The number of visitors is highest March through Labor Day and during the December holidays. Visitation is at its lowest from the middle of September through mid-November.

There is no public transportation to the park. However, a bike path or bike lane extends almost all the way from St. Augustine Beach to Fort Matanzas.