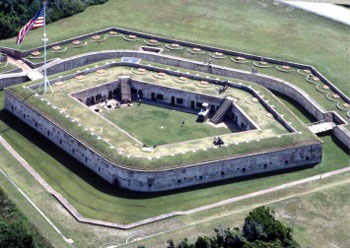 The War of 1812 demonstrated the weakness of existing coastal defenses and prompted the United States government into beginning construction on an improved chain of coastal fortifications for national defense. This ambitious undertaking involved the construction of thirty-eight new, permanent coastal forts known as the Third System. The forts were built between 1817 and 1865. Fort Macon was a part of this system. Fort Macon guarded Beaufort Inlet and Beaufort Harbor, North Carolina’s only major deep-water ocean port.

Fort Macon was designed by Brig. Gen. Simon Bernard and built by the U.S. Army Corps of Engineers. It was named after North Carolina’s eminent statesman of the period, Nathaniel Macon. Construction began in 1826 and lasted for eight years. The fort was completed in December, 1834, and was improved with further modifications during 1841-46. Total cost of the fort was $463,790. As a result of congressional economizing, the fort was actively garrisoned only from 1834-1836, 1842-1844 and 1848-1849. Often, an ordnance sergeant acting as a caretaker was the only person stationed by the Army at the fort.

Col. Moses J. White and 400 North Carolina Confederates in the fort refused to surrender even though the fort was hopelessly surrounded. On April 25, 1862, Parke’s Union forces bombarded the fort with heavy siege guns for 11 hours, aided by the fire of four Union navy gunboats in the ocean offshore and by floating batteries in the sound to the east. While the fort easily repulsed the Union gunboat attack, the Union land batteries, utilizing new rifled cannons, hit the fort 560 times. There was such exetensive damage that Col. White was forced to surrender the following morning, April 26. The fort's Confederate garrison was then paroled as prisoners of war. This battle was the second time in history that rifled cannons had been used against a fort and demonstrated the obsolescence of fortifications such as Fort Macon as a way of defense.

The Union army held Fort Macon for the remainder of the war, while Beaufort Harbor served as an important coaling and repair station for the Union navy.

During the Reconstruction Era, the U.S. Army actively occupied Fort Macon until 1877. For about 11 years during this era, since there were no state or federal penitentiaries in the military district of North and South Carolina, Fort Macon was used as a civil and military prison, until 1876.

Fort Macon was deactivated after 1877 only to be regarrisoned by state troops once again during the summer of 1898 for the Spanish-American War. Finally, in 1903, the U.S. Army completely abandoned the fort. The fort was not even used during World War I and in 1923 it was offered for sale as surplus military property. However, at the bidding of North Carolina leaders, a Congressional Act on June 4, 1924, gave the fort and surrounding reservation to the state of North Carolina to be used as a public park. Fort Macon and the surrounding property was the second area acquired by the state for the purpose of establishing a state parks system.

At the outbreak of World War II, the U.S. Army leased the park from the state and actively manned the fort with Coast Artillery troops once again to protect a number of important nearby facilities. The fort was occupied from December, 1941, to November, 1944. On October 1, 1946, the Army returned the fort and the park to the state.

Today, Fort Macon is one of North Carolina’s most visited state parks, receiving more than a million visitors a year.

Fort Macon State Park is located in Carteret County on the eastern end of Bogue Banks. From I-95, take US 70 east to Morehead City and turn south on Atlantic Beach Causeway. Cross the bridge to Atlantic Beach and turn left on NC 58. The fort is located at the tip of the island.