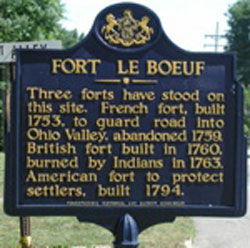 We were notified on July 19, 2010, that the Fort Le Boeuf Museum was closed due to insufficient federal funding.

This fort was the second in a series of posts that the French built between spring 1753 and summer 1754 to assert their possession of the Ohio Country. These four posts Fort Presque Isle, Fort Le Boeuf, Fort Machault, and Fort Duquesne ran from Lake Erie to the Forks of the Ohio; they represented the last links in France's effort to connect its dominions in Canada with those in the Illinois Country and Louisiana.

Fort Le Boeuf (modern Waterford, Pennsylvania) guarded the southern end of the portage road between Lake Erie and French Creek, which ran to the Allegheny River. It served as a French trading post and garrison until 1759, when the fall of Fort Niagara forced the French to abandon the Ohio Country. The British occupied the site until June 1763, when Ohio Indians angered by the British failure to withdraw from their homelands overwhelmed the garrison there during Pontiac's Rebellion.

The most famous encounter at Fort Le Boeuf took place between Virginia militia officer George Washington and the French commander of the post, Jacques Legardeur de Saint-Pierre, in December 1753. Washington delivered a message from the governor of Virginia, ordering the French to remove themselves from British land, but the French officer politely declined. He sent Washington trudging home through the snow and ice, but not before the young Virginian had taken the opportunity to record a description of the post, in case the British might need to remove the French by force.

The French destroyed this post when they retreated from the Ohio Valley in 1759, but the British rebuilt it a year later. It fell to Indians during Pontiac's Rebellion in June 1763.

Admission to the buildings is free.

From I-90, Waterford is 10 miles south on Route 19, which is High Street. The Judson House and the Museum are both located at the south end of the borough on the east side of the street.