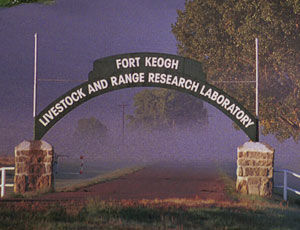 Shortly after the deaths of Colonel George Armstrong Custer and Colonel Myles Keogh, one of his officers at the Battle of the Little Big Horn on June 25, 1876, General Nelson A. Miles was sent to the area with orders to establish a fort.

Miles selected a strategic site where the Yellowstone and Tongue Rivers meet from which to conduct a military campaign against the Indians. On July 22, 1876, Congress established the Fort Keogh Military Reservation.

Miles succeeded in his mission – by the early 1880's most of the tribes had surrendered and were moved onto reservations. In 1907, all infantry troops were removed, and 2 years later the fort became a remount station of the U.S. Army. Fort Keogh supplied thousands of horses for World War I.

In 1924, the station was turned over to USDA. Since then it has been making history as a living laboratory for scientists developing management plans that improve beef production and ultimately meat quality.

"There were probably 120 buildings at the fort in the late 1800's. Today only four survive. Three are officers' quarters, on of which houses part of our museum collection, and the fourth is an old brick structure that formerly held the water wagons," says Bob Barthelmess, curator of the Range Riders' Museum, Miles City.

"My grandfather arrived here in 1886. While the military activities were pretty much over by that time, he did chase Chief Sitting Bull," says Barthelmess.

"The fort's greatest population at any one time was probably in 1895 when 800 troups and officers, plus another 500 civilians, were present. At that time, the surrounding area was essentially virgin grassland."