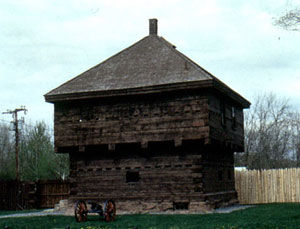 Fort Kent State Historic Site bears the distinguished honor as one of Maine's few National Historic Landmarks, a testimony to its important role in securing the state and national border. Named after Maine's Governor Edward Kent, Fort Kent served as Maine's northern post during the international border dispute during the Aroostook War, and is Maine's first, state-owned historic site.

The Blockhouse, which housed officers in the mid-1800s, today welcomes visitors who come to explore the uppermost reaches of Maine. Eastern coastal Route 1 begins in the town of Fort Kent and stretches south to Key West, Florida. The northern terminus of the Allagash Wilderness Waterway is a short distance to the West, and, Aroostook State Park, with camping and picnicking can be reached off US Route 1 south of Presque Isle.

Off Route 1 in the town of Fort Kent