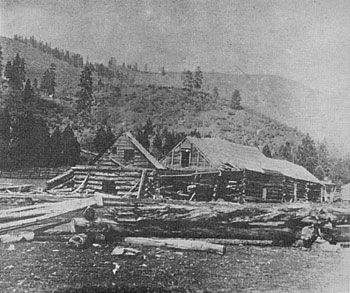 With the advent of the California "Gold Rush," Captain Edward H. Fitzgerald of the 1st Dragoons was ordered to establish a fort in present Siskiyou County. In 1852, he selected a site in "Beaver Valley" (Scott Valley.) By 1855-56, Inidan conflicts subsided and Fort Jones became little more than an outpost. In 1858, orders were received to evacuate the fort.

Until the end of the Civil War, the fort was used by local militia, but by 1870, the structure had begun to decay. Some time afterc the turn of the century, remaining fort structures collapsed.

Today, an historical marker on Eastside Road and the town of Fort Jones are the only evidence that the fort ever existed.