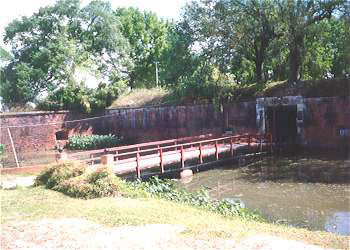 Fort Jackson is situated 32 nautical miles from the Gulf of Mexico, 22 miles from the lighthouse at the head of the passes, and 65 miles in a southeasterly direction from New Orleans. It is located in Section 50 of Township 20 South, Range 30 East, Southeastern District of Louisiana , on the west bank of the Mississippi River in Plaquemines Parish.

Built in a regular star-shaped pentagon, the fort's walls were 25 feet above the water line of the wet ditch (moat) which completely surrounded it. These walls were constructed of red brick and were 20 feet thick. The gun foundations were reinforced with red and gray granite. Two curtains facing the river were casemated for 8 guns each. In the center of the fort there was a diagonal-shaped defensive barracks which was intended as a bomb-proof shelter accommodating 500 men.

The foundations of Fort Jackson were made of three layers of cypress logs topped by cypress 2 x 4's used as a leveling device. The device was made airtight by being submerged in water.

Fort Jackson was born of necessity. Because of the proximity of Spain, sometimes friend, sometimes foe, many Louisianans felt the need for stronger fortifications to protect the lower Mississippi River delta. It was true that Fort St. Phillip, located on the east bank of the river, had repulsed the British fleet after a nine-day bombardment in 1815 and had prevented it from joining General Pakenham's land forces attacking New Orleans. But could this single fort protect the city and keep the river secure in the future? General Andrew Jackson, hero of the Battle of New Orleans, in his report to Secretary of War J.C. Calhoun, strongly emphasized the need of additional fortifications to protect the mouth of the river from possible Spanish attack. It was largely because of General Jackson's recommendations that the U.S. Government began the construction of Fort Jackson in 1822.

Fort Jackson was not the first fortification to be constructed on the west bank of the river. Earthen and timber breast works dated back to the middle 1700's. Among the earliest references to fortifications at Plaquemines Bend is one dated 1746, when this site was recognized by Lenormant, French intendent commissary in Louisiana, as ideal for defenses. Sailing vessels, compelled to tack to negotiate the bend and sailing against a four mile current, would be an easy target for land batteries.

Later, in 1792, Baron de Carondelet, Spanish governor of Louisiana, constructed Fort St. Phillip, then called Fort San Felipe. On the opposite, or right bank, he erected a redoubt that he named Fort Bourbon, which became the cornerstone of the west bank fortification from which Fort Jackson eventually evolved. Fort Bourbon was destroyed by a hurricane in 1795 and Carondelet ordered it rebuilt.

The British attempt in the War of 1812 demonstrated the need of a major fort on the site previously occupied by the highly vulnerable Fort Bourbon.

Construction of Fort Jackson, named after Andrew Jackson, began in 1822 and was completed and occupied in 1832. The total cost of construction was $554,500. It was then garrisoned by a small force until February 9, 1842, when it was declared a military reservation by executive order of President John Tyler. With the coming of the Mexican War, it was imperative that the Forts, St. Phillip and Jackson, be prepared for any emergency. On June 1, 1846, Governor Isaac Johnson of Louisiana ceded the lands to the National Government. Fortunately, these defenses were not needed during the Mexican War.

Both forts remained garrisoned with only a few soldiers until seized by the State of Louisiana on January 8, 1861.

Fort Jackson and St. Phillip were important defenses of New Orleans and with their surrender, after Farragut had reached the city, the control of the lower Mississippi was in Federal hands.

With steam vessels in use, it was evident that some sort of barrier across the river would be necessary to defend the Forts and New Orleans properly, as there were no established fortifications between the mouth of the river and the city. With an obstruction and a cooperating fleet, it was felt that Fort St. Phillip and Fort Jackson could safeguard the river approaches to New Orleans from the South. The Daily Picayune expressed the prevailing sentiment of many Orleanians and most Southerners in an editorial: "...By land we are impregnable and the coast and river's assailable points are susceptible to a degree of defense that floating wood or iron cannot make an impression."

After the Civil War, use of the Forts at Plaquemines Bend was an on-again off-again matter. Fort Jackson was used as a prison and later as a minor training base. Gradually, much of the reservation was abandoned. During the Spanish-American War in 1898, the Fort was repaired and modernized and two large coastal guns were installed.

During World War I (1917-1918), the Fort was again used as training base. After the war, both Forts Jackson and St. Phillip were declared surplus property and eventually sold.

Fort Jackson was purchased on November 9, 1927, by Mr. and Mrs. H.J. Harvey of New Orleans. In 1960, Mr. and Mrs. Harvey donated the land to the Parish of Plaquemines. The donated portion of the reservation site was acquired for the purpose of completely renovating the Fort and surrounding grounds.

In 1960, the U.S. Department of the Interior classified Fort Jackson, and its sister Fort St. Phillip, as national historical monuments. Later in 1961 the Plaquemines Parish Commission Council, through its president, Judge L.H. Perez, began the restoration program to transform the abandoned Fort and its 82 acre reservation, which had become a veritable jungle with mud-filled tunnels infested with snakes, into an historical mecca for tourists and recreational center.

First a protection levee was built to ring the Fort and protect it against high waters of the Mississippi River, then an automatic pumping station was installed which drained the water. The mountains of slush were removed; the area cleared and an access road was built to the Fort, plus a 300 square foot parking area. This was followed by the repairing and replacing of brick walls and restorations of guns and gun placements, replanking bridges and walkways and the opening of the original Fort moats anddrains.

In addition, two beautiful multicolored fountains have been installed on the turret in the Spanish-American disappearing gun placements, a subsurface lighting system installed, a water system built, and wrought iron picket guards erected on top of the wall of the Fort to protect the tourists; grass has been planted within the Fort and comfort stations have been provided, as well as identifying markers throughout the Fort so that tourists may learn more about the Fort.

Also a permanent relic and souvenir exhibit has been established and a program set up to recover (by electronic equipment), more of the war relics within the boundaries of the Fort.

Additionally, the people of the Parish, through popular subscription, have erected a brick entrance arch to Fort Jackson leading to the Judge L.H. Perez Drive, at the intersection of the main Fort entrance and State Highway 23. This was done as an expression of appreciation to Judge Perez for his efforts in restoring the Fort and making it available to the public.

As a result of the restorative work, the glory of Fort Jackson lives again and one of America's greatest landmarks is preserved for posterity.

Fort Jackson is on Louisiana SH-23 approximately 70 miles south of New Orleans. The park is open year-round during daylight. The museum and gift shop are open from 9:00 a.m. to 4:00 p.m. daily.

We received a message from a visitor of our site:

Rick, I realize that the inside of the fort is already closed to the public. However, the areas outside of it (include the steps up to the river viewpoint) have a dangerous mosquito infestation. I was attacked pretty badly today when I went up to that viewpoint, Must have been bitten by at least 30 or 40 mosquitos. Thankfully, I wasn't seriously injuried, but someone else might have a severe reaction.

I wonder if would be good to post a warning or do something to stop the infestation.

Just wanted to let you know.
Ted Gemberling, tourist from Birmingham, Ala.