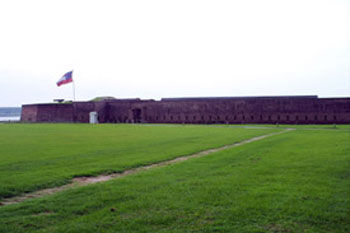 Climb the ramparts of Fort Jackson and it is easy to see why this site was chosen to build a brick fort to protect Savannah on this spot. The year was 1808 and our relationship with Britain had worsened considerably over the past few years. Authorized by President Thomas Jefferson, land was purchased for $1,800 along the Savannah River at what was then called Salter's Island. Here Fort James Jackson was built to defend the city of Savannah against naval attack. Farther up river Fort Wayne was also built along the cliffs of what is now the corner of General McIntosh Blvd. and Bay Street.

Named for James Jackson, the fort is the oldest standing fort in Georgia. It was not the first fort to occupy the site, however. In 1776 Savannah residents built an earthen fort, which was destroyed by the construction of Fort Jackson.

During the War of 1812 the fort was armed with 24 pounder cannon and manned by Georgia State Militia, the 8th U.S. Infantry and the 2nd U.S. Artillery. Although Fort Jackson was never attacked, British privateers set fire to American sloops and schooners just off the coast of Georgia, and continued harrassing the Georgia coastline until the end of the war when a British fleet under the command of Vice Admiral Alexander Cochrane (involved in the burning of Washington, DC and the bombardment of Fort McHenry) awaited the opportunity to threaten Savannah. The War of 1812 ended with the Treaty of Ghent, perhaps sparing Fort Jackson and Savannah.

Nearly obsolete, now having Fort Pulaski as a much stronger defense for Savannah, Old Fort Jackson became the Confederate headquarters for all of the river defenses guarding Savannah during the War Between the States. In addition to the numerous earthenwork fortifications General Robert E. Lee had authorized to be built along the rivers surrounding Savannah, the Savannah River Squadron was formed consisting of a handful of small armed ships and three new ironclads, the C.S.S. Georgia, C.S.S. Atlanta, and C.S.S. Savannah, all of which had been built at the Savannah shipyards.

On December 17, 1864, General William T. Sherman demanded the surrender of "the surrender of the city of Savannah and its dependent forts." The surrender demand was received by General William Hardee, who commanded the Confederate forces in Savannah. Rather than fight (General Hardee was overwhelmingly outnumbered nearly 6 to 1), the order was given to evacuate the city of Savannah and surrounding defenses on the evening of December 20, 1864. The following morning General Sherman's army marched into Savannah seizing all military fortifications including Fort Jackson."

During the next 40 years the fort saw limited military use, eventually being de-commissioned in 1905. In 1964 the Georgia Historical Commission (now Georgia DNR) resurrected the old fort into a maritime museum. However, due to financial cutbacks the fort was closed and was in jeopardy of being dismantled and the property to be sold for commercial use. Local citizens formed the Coastal Heritage Society, a non profit historical organization, taking over the management of the site in 1976 under a lease agreement with the state of Georgia.

Plan on spending at least 1 hour when you visit the fort. As you leave the Tybee Depot the site of the C.S.S Georgia is directly in front, near a cannon embankment. From here continue to the sentry box in front of the "sally port," the techical designation for the entrance to a fort. The open land in front of the fort was once a rice field.

After entering through the sally port there is a brief film describing the history of the fort. A highlight of the visit is the Coastal Heritage Society exhibits that explain the fort's relationship with the city of Savannah, weapons used at the fort, and the fort itself. These displays are locate in the casemates (technically a protected chamber within the fort) beneath the ramparts .

Then comes the tour of the ramparts itself. In addition to the cannon, there is a beautiful view of the Savannah River and the coastal plain. Leaving the rampart be sure to visit the privy in the southeast corner of the fort. Once a day the tidal nature of the river would "flush" it out.

On the Savannah River in Savannah