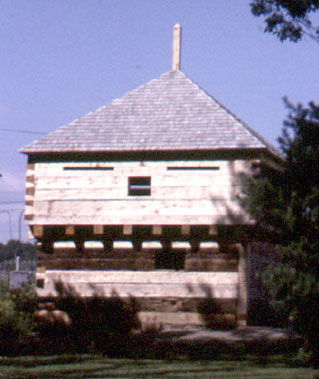 Fort Halifax, built in 1754, was the oldest blockhouse in the United States before it was destroyed during the flood of 1987. Today, the fort bears the designation as a National Historic Landmark. A reconstructed blockhouse, which incorporates many timbers from the 1754 blockhouse, stands on the fort's original site at the confluence of the Kennebec and Sebasticook Rivers in Winslow.

Fort Halifax was built at this strategic location to protect English colonial settlements along the Kennebec and was garrisoned from 1754-1766.

One mile south of the Winslow-Waterville bridge on U.S. Route 201