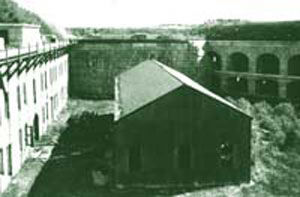 After the War of 1812 the U.S. Army Corps of Engineers proposed a new fortification on Hog Island Ledge to support forts Preble and Scammel and to cover the northeastern approaches to the harbor. Funding for the fort was approved by Congress in 1857, and construction began the next year. A wharf and stone cutting shed were built on Hog Island Ledge, footings laid, and erection of the walls begun. With the outbreak of the Civil War in 1861, work was speeded up. By 1864, the fort was well on its way to completion and twenty-six guns had been mounted while construction continued. By 1865, work was completed according to the original plan, and it was named in honor of Sir Ferninando Gorges, colonial proprietor of Maine.

In 1869 a modernization project was begun to upgrade the fort. Guns and gun platforms on the third level were removed, and new emplacements for larger guns begun on the north, east and west faces with adjacent powder magazines, with parapets and magazines protected by sod-covered sand. An embankment or "parados" of sod-covered sand was built on the south face to protect the rear of the guns and magazines. A two-story "great magazine" was built on the east end of the parade ground to store the large amounts of powder required by larger guns. Thirty-four guns remained mounted in the casemates on the first and second levels of the fort.

In 1876, Congress ended funding for the modernization project with work on the third level unfinished. At the time of the Spanish War, thirty-one guns remained mounted, but these were salvaged shortly thereafter. In 1897, the Army constructed a submarine mine storehouse in the center of the parade ground with a small railroad running from it to a crane at the end of the wharf. A caretaker, Charles Rust, and his family lived in the fort in the apartments to the east of the entrance until 1916. His granddaughter was born there.

In the 1930s, the Coast Guard installed an aid-to-navigation beacon in the fort which was powered by a generator and shown out through one of the gun embrasures. In 1940s, rolls of steel cable for submarine mines, submarine nets or moorings were stored in the fort in the mine storehouse and casemates. In 1946, the fort was declared surplus by the General Services Administration. In 1960, Fort Gorges was acquired by the City of Portland as an historic site, and it was placed on the National Register of Historic Places by the National Park Service. 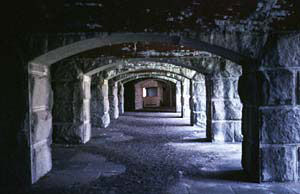 Construction: Built of granite and brick with iron beams supporting the floors of the officers apartments. Apartments were finished with wood lath and plaster, wooden floors, doors, and double-hung windows. Floors and ceilings of the powder magazines were built of wood, with concealed nails to avoid sparks.

First Level: The first level contained twenty-eight casemates for 10-inch Rodman guns with flues to exhaust powder smoke, and embrasures protected by iron stutters. Powder magazines were located in the northeast and northwest corners of the fort. The north end of the fort contained officers apartments, store rooms, a bakery, and privies, which emptied into the ocean. In 1869-76 the magazine in the northeast corner was expanded into the parade ground area. 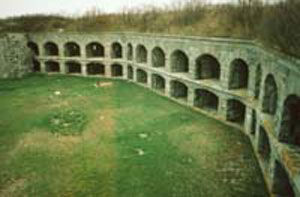 Second Level: The second level also included twenty-eight casemates for 10-inch Rodman guns, and powder magazines in the northeast and northwest corners. Circular staircases on the southeast and southwest corners of the parade ground gave access to the second and third levels of the fort.

Third Level: This level was originally planned for thirty-nine emplacements for 10-inch Rodman guns. In the years from 1869 to 1876, it was rebuilt to mount eleven 15-inch Rodman guns protected by earth parapets, with adjacent powder magazines. Funding ran out before the modernization was completed.

Troops: 500 men would have been required to man all of the guns. The gun casemates on the first and second levels would have been framed in, and doors, windows and stoves installed to serve as quarters for the enlisted men, but the fort was never permanently garrisoned.

Water: There are two brick water cisterns in the parade ground and four in the floors of the apartments.

Armament Emplaced: In 1864 there were 26 smooth-bore, muzzle-loading 10-inch Rodman guns (similar to the gun shown here) mounted on the first level and three rifled, muzzle-loading Parrott guns mounted on the third level. Although the fort was not garrisoned, it could have been quickly manned with troops from Fort Preble or Fort Scammel. In 1870 there were twenty-eight 10-inch Rodman guns mounted, plus six Parrott guns. In 1896, a 300-pound (10-inch) rifled Parrott gun was raised to the third level, where it remains unmounted. The rest of the guns were scrapped after 1898.

Light fires only in the fire ring on the parade ground. Please keep fire away from the stonework because it shatters the granite. Do not remove wood from the apartments or powder magazines as they are being restored. There are no restrooms. Please carry out all trash. Your help in preserving this historic structure for future generations will be greatly appreciated.