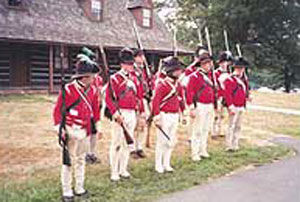 The site of Maryland's frontier defense during the French and Indian War (1754-1763), the Fort's stone wall and two barracks have been restored to their 1758 appearance. Historic displays are in the Fort, barracks and Visitor Center. The park annually holds military reenactments and other special events. Park lands adjoin the Potomac River and the Chesapeake and Ohio Canal passes through park acreage. Tours are available by request. Daily Living History programming is available from Memorial Day through Labor Day.

The stone fort, named in honor of Maryland's Lord Proprietor, Frederick Calvert, Sixth Lord Baltimore, was erected by Governor Horatio Sharpe in 1756 to protect English settlers from the French and their Indian allies. Fort Frederick was unique because of its large size and strong stone wall. Most other forts of the period were built of wood and earth. The fort served as an important supply base for English campaigns. During 1763, an Ottawa Indian chief named Pontiac forged a massive Indian uprising. Several hundred settlers and militia force sought protection within the fort during this brief uprising.

Fort Frederick saw service again during the American Revolution as a prison for Hessian (German) and British soldiers. In 1791, the State of Maryland sold the fort. For the next 131 years, the fort and surrounding were farmed.

In 1922, the State of Maryland re-purchased the fort. Throughout the 1920's, the State began development of Maryland's first state park. During the Great Depression of the 1930's, a company of the Civilian Conservation Corps was assigned to the park to reconstruct the dilapidated stone wall, perform archaeology with the reconstruction of the enlisted men's barracks stone wall, and locate the foundations of the original interior buildings. Restoration continued in 1975. Future plans include reconstruction of the Officer's Quarters and other defensive works. Pick up a map of the park.

Concession items, including souvenirs and food, are offered at Captain Wort's Sutler Shop. Call the park for shop hours. Canoes and rowboats are rented through the Sutler Shop. Boats can be used on Big Pool only.

Fort Frederick State Park offers two easy trails for hikers. The Plantation Trail, a 3/4 mile trail for intermediate users, passes through various stands of experimental trees. The trees were planted from 1925 to 1942 to demonstrate the adaptability of various forest plantings to the climate and topography of Western Maryland. The trail is accessible only to hikers. The novice Wetlands Trail, .3 miles in length, passes along a wetlands area behind the campground. Hikers can see several species of turtles, waterfowl, birds, as well as white-tailed deer and other wildlife.

Camping is available on 29 unimproved sites. The family campground is first come, first served and includes portable toilets only, fire ring and table. Four youth group camp sites are available for organized youth groups, ages 16 and under, who have a youth group pass. For Youth Group reservations, call the park office at 301-842-2155. Inquire for camping season beginning and ending dates, and camping and shelter service charges.

Fort Frederick State Park is located in the Cumberland Valley, 18 miles west of Hagerstown and one mile south of I-70 near Big Pool (Rt. 56, Exit 12). The park is 88 miles from Baltimore and 81 miles from Washington, D.C.