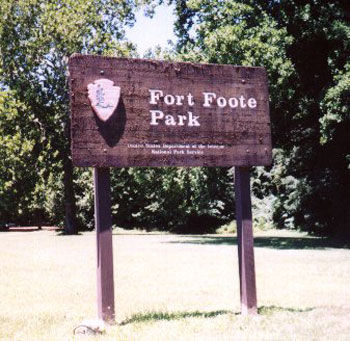 Eight miles downriver from the capital, Fort Foote was considered "a powerful enclosed work" by its chief engineer, "and the most elaborate...of all the defenses of Washington." The long oval earthwork was constructed on Rozier's Bluff from 1863 to 1865 to strengthen the ring of fortifications that encircled Washington, D.C., during the Civil War. Fort Foote was designed to protect the river entrance to the ports of Alexandria, Georgetown, and Washington and replace the aging Fort Washington as the primary river defense. The fort was named for Rear Adm. Andrew H. Foote who died in 1863 from wounds he received in combat the previous year.

Over the massive rammed-earth parapets, two 15-inch Rodman guns and four 200-pounder rifled Parrotts had muzzles trained down the Potomac River. With a deafening roar, the Rodman cannon could hurl 440-pound shells for three miles. Siege and field guns were stationed to fire on any party attacking from land. Companies of the 9th New York Heavy artillery worked to build and arm the fort. The last in the ring of forts and batteries to be abandoned when peacetime returned, Fort Foote continued in active status until 1878. It was briefly reactivated as a training site during World War I.

Today the National Park Service has cleared paths around the ruins of what is considered the best preserved Civil War fort in the region. Remounted on carriages, two Rodman guns loom in shadows under the trees, the river still in their sights.

Fort Foote is located on the Potomac River in Prince Georges County. From the Beltway (I-95), take exit 3A, Indian Head Highway south (MD210) and drive for approximately 3.5 miles to Old Fort Road. Turn right for 1 mile to Fort Foote Road S, turn left. Follow the winding road through the residential area to entrance sight on the left for the fort.