Part of our series exploring the Sioux Forts 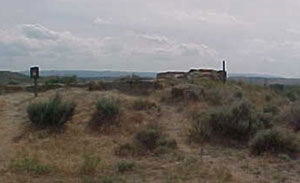 Fort Fetterman, located approximately eleven miles northwest of Douglas, Wyoming, is situated on a plateau above the valleys of LaPrele Creek and the North Platte River.

A restored officer's quarters and an ordinance warehouse are original buildings. They stand among the many visible foundations of the fort and Fetterman City. These two buildings house interpretive exhibits and artifacts of the Fort's history, Fetterman City, and its Indian predecessors.

The visitor is encouraged to walk the grounds where interpretive signs describe the fort's buildings and activities. These two buildings house maps, drawings, photographs, artifacts, and dioramas which interpret the history of the Indians, Military, and Civilians of Fort Fetterman and Fetterman City. The visitor is encouraged to walk the interpretive trail where signs describe the historic site and lead to a gazebo overlooking Crook’s Camp and the Indian Country to the north. The site provides several picnic areas and a shelter for group or individual use. Historic guided tours are available upon request and by appointment by calling Fort Phil Kearny State Historic Site (307) 684-7629.

Camping is allowed at Fort Fetterman. Please call Park Headquarters at 358-2864 to make your reservations.

Located north of Douglas, Wyoming, Fort Fetterman is situated on a plateau above the valleys of LaPrele Creek and the North Platte River. It was established as a military post on July 19, 1867, because of conditions that existed on the Northern Plains at the close of the Civil War. Civilization was advancing across the frontier along the line of the Union Pacific Railroad and the fort was needed as a major supply point for the army operating against the Indians. On July 31, 1867, the post was named Fort Fetterman in honor of Captain William J. Fetterman who was killed in a fight with Indians near Fort Phil Kearny, December 21, 1866. Major William McEnery Dye, with Companies A, C, H, and I, 4th Infantry, was assigned to build the post.

According to his report to the Department of the Platte, ..."officers and men, were found under canvas exposed on a bleak plain to violent and almost constant gales and very uncomfortable..." the garrison managed to get through the winter and the fort continued to grow and develop until, by 1870, it was well established, and destined to play a conspicuous part in the Indians wars for the next few years. Jim Bridger, Wild Bill Hickock, Calamity Jane and "Buffalo Bill" Cody were among the colorful personalities of the time whose activities and travels took them frequently to Fort Fetterman.

In accordance with the Treaty of 1868, Forts Reno, Phil Kearny, and C.F. Smith, along the Bozeman Trail were abandoned. Fort Fetterman, alone, remained on the fringe of the disputed area. As an outpost of civilization on the Western frontier, the fort represented protection and a haven to travelers. Fort Fetterman was always considered a hardship post by officers and men who were stationed there.

On May 18, 1874, Captain F. Van Vliet, of Company C, 3rd Cavalry, felt so strongly about the hardships on his men that he wrote to the Adjutant General requesting his company be transferred because there was "...no opportunity for procuring fresh vegetables, and gardens are a failure. There is no female society for enlisted men...the enlisted men of the company are leaving very much dissatisfied, as they look upon being held so long at this post as an unmerited punishment...whenever men get to the railroad there are some desertions caused by dread of returning to this post..."

Desertions were common, and the post frequently lacked adequate supplies and equipment. Supplies had to be hauled from Fort Laramie to the southeast or from Medicine Bow Station on he Union Pacific Railroad. Luxuries were scarce and pleasures few. However the soldiers found some diversion from the garrison life at a nearby establishment known as the "Hog Ranch."

During the mid-1870s, Fort Fetterman reached its pinnacle of importance when it became the jumping-off place for several major military expeditions. It was the base for three of General George Crook's Powder River Expeditions and Colonel Randall Mackenzie's campaign against Dull Knife and the Cheyenne Indians. These events contributed to the end of the resistance by the Plains Indians who shortly after were confined to reservations. With the passing of Indians from the scene, the fort had outlived its usefulness. 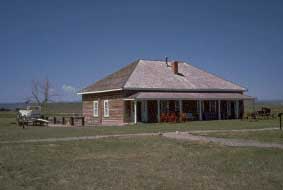 When the military abandoned the fort in 1882, it did not die immediately. A community grew up at the post and after 1882, it was an outfitting point for area ranchers and for wagon trains. The boom was short-lived, however, and in 1886, the town of Douglas was founded a short distance to the south. The old fort, in a state of decay, lost out as a town and declined rapidly. Most of the buildings were sold, dismantled or moved to other locations.

A restored officer's quarters and an ordnance warehouse are original buildings. They stand among the many visible foundations of the Fort and Fetterman City. These two buildings house interpretive exhibits and artifacts of the Fort's history, Fetterman City, and its Indian predecessors.

Camping is allowed at Fort Fetterman. Please call Park Headquarters at 358-2864 to make you reservations.

Fort Fetterman Days often focus on 1800’s Living History Programs, Presentation, and Interpretation. Several speakers will present talks discussing the methodology, equipment, safety, research, and training necessary to present a successful Frontier Living History Presentation. In addition to speakers, several living history units have been invited to the site to set up camps, giving impromptu demonstrations, drill and training for new recruits. Living History Groups will include Frontier Military Infantry, Cavalry, Artillery, Women and Children, and Native Americans. The public is invited to attend the talks, and participate in the demonstrations and drill. For further information for those who would like to participate or attend, you may contact Robert Wilson, Site Manager, at [email protected] or call 307-684-7629.

Fort Fetterman and the Pioneer Museum will host a combination Fort Fetterman and Fetterman City Days. This year we will present tours of Fort Fetterman and Fetterman City , set up a period encampment and support the Wyoming Pioneer Memorial Museum ’s annual art show and quick draw. Saturday afternoon several Living History personalities will act as models for the Quick Draw and provide some demonstrations during the afternoon at the Wyoming State Fair Grounds. That evening the artists and other interested individuals are invited to Fort Fetterman for a Bar-B-Que and additional demonstrations and dance. For more information or for those who would like to participate and attend you may contact Robert Wilson, Site Manager, at [email protected] or call 307-684-7629