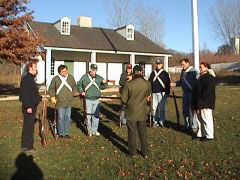 Originally known as French Fort la Baye, a frontier outpost and trading post built by Nicholas Perrot. A French Jesuit mission was first established here in 1669. The fort was rebuilt and renamed in 1717. Also spelled St. Francis. It was destroyed by Indians in 1728, and was not rebuilt for five years. It was abandoned in 1760. In 1761 it became British Fort Edward Augustus but was abandoned during the Pontiac Uprising. The original site is on the west-side of the Fox River at the foot of the Dousman Street Bridge, marked by a flagpole. On display at Heritage Hill.

Ages 4 and Under: Free