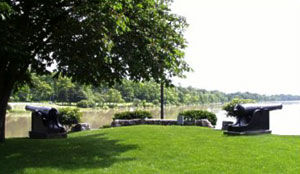 On August 9, 1794 work was started on the Fort and completed by the 17th. Wayne surveyed the land and declared to Gen. Scott; "I defy the English, Indians, and all the devils of hell to take it." This area became Fort Defiance.

Even with a variety of hardships the fort was an active place until after the signing of the Treaty of Greene Ville. Eventually it was regularly visited by many traders. The confluence was a white man's reservation in Indian territory.

Though constructed in eight days, and with such rude implements and materials as were at hand, engineers have pronounced it by far the strongest fort built during the many years of Indian warfare. The annexed description is found in the memoranda of Benjamin Van Cleve, having been communicated to the American pioneer by his son, John W. Van Cleve, of Dayton. "At each angle of the fort was block-house. The one next the Maumee had port-hoes on the three exterior sides, and a door and chimney on the side facing to the interior.

There was a line of pickets on each side of the fort, connecting the block-houses by their nearest angles. Outside the pickets, and around the block-houses was a glacis, a wall of earth eight feet thick, sloping upward from the foot of the pickets, supported by a log wall on the side of the ditch, and by fascines, a wall of fagots, on the side-next the Auglaize. The ditch, fifteen feet wide and eight feet deep, surrounded the whole work, except on the side toward the Auglaize; and diagonal pickets, eleven feet long and one foot apart, were secured to the log wall, and projected over the ditch. There were two gateways; there was a falling gate or draw bridge, across the ditch, which was raised and lowered by pulleys. Two lines of pickets converged toward a ditch eight feet deep, by which water was procured from the river without exposing the carrier to the enemy. Within the fort were officers' quarters and store-houses."