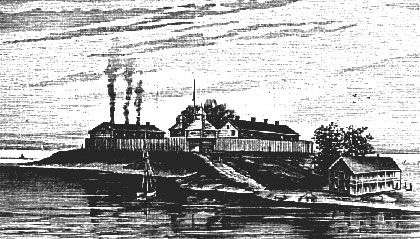 It was not until 1803 that the War Department ordered the construction of a fort at the mouth of the river. Troops arrived in the area on August 17 and began building shelters and a stockade. A year later, Fort Dearborn, named in honor of the Secretary of War, was completed.

For some years the garrison was peaceful and traders flourished. However, the outbreak of the War of 1812 with Great Britain moved the government to order the evacuation of the fort. The threatening attitude of the Indians led the entire population of the settlement to follow the garrison. After leaving the fort, the evacuees were attacked by Indians and many of the party were massacred and the fort was destroyed. 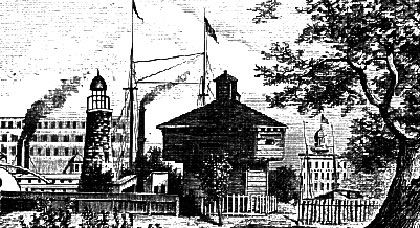 In 1816 the fort was rebuilt and was thereafter occupied by United States troops for twenty-one years. In 1837 it was abandoned but the fort stood until 1856 when it was finally torn down. One small building remained until the Great Fire of 1871. Located on East Wacker Drive between Michigan and Wabash Aves. A replica was built in 1933 for the Chicago World's Fair (at Prairie and 16th Streets?). It was later dismantled. A newer reproduction is located on 26th Street near Lake Michigan.

We received the following e-mail from a visitor to our site with great information regarding markers at Fort Dearborn. Thanks, Joel.

Of Fort Dearborn's location, your site says only that it is "Located on East Wacker Drive between Michigan and Wabash Aves." You may want to add that at that location there are bronze markers embedded in the sidewalks demarcating the exact boundaries of the fort. This would enhance the experience of anyone visiting the area. I always enjoy looking for the markers when I am walking through that area, and I stop and look at the markers and the Chicago River and attempt to visualize the fort along its banks. Nice website. Thanks. Sincerely, Joel Weiner