The Fort Croghan Museum and Grounds are open April through August, Thursday through Saturday, from 10 a.m. until 5 p.m.

Established in 1849, Fort Croghan was the third of the first four forts established by the United States government to protect settlements from hostile Indians. From 1849 until its decommission in 1853 Fort Croghan was the home to Company C, 8th Infantry, U.S.A. (mounted) and eventually became the headquarters of the Second Dragoon Regiment.

Today's Fort Croghan is representative of those early days of what was to become Burnet, Texas. Come and visit us. See the sights and imagine the sounds of the frontier as you visit the blacksmith's shop, the one room school house, the powder house or the stage coach stop. The museum offers over 1200 historic artifacts from in and around the Burnet County area. Come visit the Texas frontier as it once was. Come visit Fort Croghan.

After the annexation of Texas to the United States in the 1840's, the federal government became responsible for the protection of the frontier settlers from Indian raids. Several companies of Texas Rangers were stationed along the frontier. In December of 1847 a company commanded by Henry E. McCulloch established what became known as McCulloch's Station. When the station was chosen as a fort on March 13, 1849, Company A of the Second Dragoons took over their new assignment on March 18th when the site officially became a federal fort and was named Fort Croghan, in honor of Col. George Croghan, a hero at the battle of Fort Stephenson in the War of 1812. 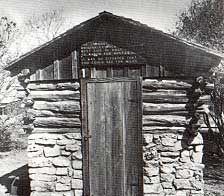 Old Outpost Building on the grounds of Fort Croghan -
Photo by Charles M. Robinson, III from the book, Frontier Forts of Texas

The site included a hospital which was a large four room log building, officers quarters and a variety of utilitarian buildings. Officers quarters consisted of four log houses, each with two rooms separated by a hall. Buildings were made of oak covered with shingles. In 1852 the fort became the headquarters of the Second Dragoons.

The presence of troops encouraged settlers to make their homes in Burnet County. Among these were such county notables as Noah Smithwick, Logan Vandeveer and Peter Kerr. By December of 1851 the population was large enough to establish a new county. Burnet County was formed with the county seat established near the location of the fort. The federal government abandoned Fort Croghan in December 1853 when it was thought that the population of the area was sufficient to hold its own against the remaining Indians.

Jerry Thompson reports from his book, Confederate General of the West:

In August 1852 Sibley said adieu to Fort Graham. Along with Charlotte, Sidney Johnston and Helen Margaret the captain led his dragoons across rolling prairie some 110 miles to the south-southwest to occupy a post on Hamilton Creek, a tributary of the Colorado, fourteen miles above its junction with the larger river. Fort Croghan, where they arrived on August 29, 1852, was on the edge of the Texas Hill Country, and had been established at the same time as Fort Graham. The forts were similar in appearance. Buildings were made of oak logs with shingle roofs. Officers' quarters consisted of four log houses, each having two rooms separated by a breezeway. For entertainment there was the small community of Hamilton on the opposite bank of Hamilton Creek which boasted of a population of two hundred, a few stores, and a tavern or two. Mail arrived over a rough and rocky road from Austin once a week. Sibley's stay at Fort Croghan, however, was to contrast dramatically with his peaceful tour of duty at Fort Graham.

As Sibley had learned, most Indian depredations came not from some grand design to rob and plunder the Texas frontier but out of desperation. Frequently, the Indians who passed near Fort Croghan were on the verge of starvation.

Indian raids were reported throughout the winter of 1852-1853, many in the vicinity of the post. Matters reached a climax on a rainy night in the spring of 853 when several Indians stole nine of the dragoons' best horses from the post stables. When the theft was discovered the following morning, Sibley, taking seventeen men, went in pursuit of the Indians. Although heavy rain the previous evening had obliterated the trail, indications led Sibley to believe that the Indians were making for the villages on the upper Brazos. The column thus struck out for the newly established post on the Clear Fork of the Brazos, commonly known as Phantom Hill, roughly 175 miles distant. Further information caused the brevet major to believe the theft to be the work of the Wichita.

Reaching the Indian Agency on the Clear Fork, Sibley, in a conference with Agent Stem was able to definitely determine that the horses had been stolen by a party of Wichita. Indian runners were sent to the Wichita Village to demand the return of the horses and punishment of the thieves. Sibley waited at the agency for five days, occupying himself in "fishing and in night-shooting of turkeys." On the fifth day, a band of Wichita were reported approaching the agency from the north, driving before them a small herd of run-down horses.

...By the fall of 1853, the steadily advancing Texas frontier had all but passed Fort Croghan, moving west and north. Word came from Washington that the post was to be abandoned, and once again Company I of the Dragoons, with Sibley in command, moved out, leaving Lieutenant Newton Curd Givens behind to pack up and make property disposals.

Group tours can be scheduled year around. Call in advance to make your reservation. Children's groups are requested to have a minimum of one adult to every eight children.