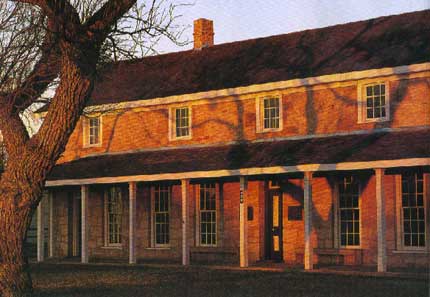 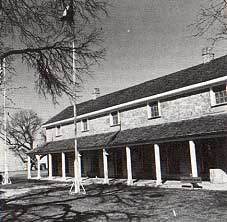 Photo of the headquarters building that contains a military museum taken by Charles M. Robinson, III from the book, Frontier Forts of Texas.

The center of a line of forts extending from the northeastern border of Texas to El Paso. Was also northern point of southern chain of forts extending to Rio Grande, thence along that river to its mouth. Established 1867 (at then junction of Butterfield Trail, Goodnight Trail and road to San Antonio) by 4th Cavalry under Capt. George G. Huntt to protect frontier.

By March 1, 1870, fort buildings were (in order of their construction) a commissary and quartermaster storehouse, hospital, five officers' quarters, a magazine and two barracks-all built of sandstone. 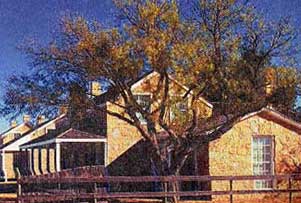 Among those who commanded the post were: Gen. Wm. R. Shafter (later Major General of Volunteers, Spanish-American War and commanded troops at capture of Santiago de Cuba, July 1898); Maj. John P. Hatch (at one time fort was named in his honor); Gen. Wesley Merritt (first commander of Fort Davis after Civil War; was later superintendent of U.S. Military Academy at West Point); Gen. Ranald Slidell Mackenzie (who led attacks from this and other forts, credited with defeat of Indian resistance in Southwest); and Gen. Benjamin H. Grierson, commander of African troops of 10th Cavalry.

On June 20, 1889, fort was abandoned as a military post and property passed into private ownership.

R.G. Carter brought his bride to Texas from Boston to be with him while he served as Mackenzie's adjutant, fighting the Comanches on the border.