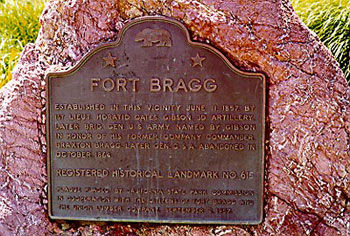 Established in June 11, 1857, Fort Bragg was located about 50 miles south of Cape Mendocino and situated one and a half miles north of tile Noyo River, at the present town of Fort Bragg, Mendocino County, California. It was established within the Mendocino Indian Reservation for the purpose of both controlling and safeguarding the area's Indians. Established by 1st Lieutenant Horatio Gates Gibson, 3rd Artillery with a detachment from Company M, the post was named for Captain Braxton Bragg, 3rd Artillery, a Mexican War veteran and later a general in the Confederate Army. There was a period of agitation to have the post's name changed because of his disaffection but the post retained the name during the Civil War. 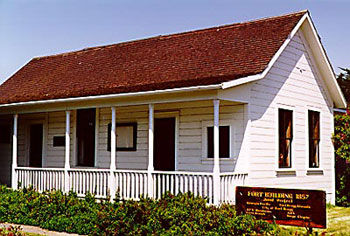 In September 1864 many Army units serving in the Humboldt district were ordered south. The steamer Panama left Humboldt Bay October 18, 1864, picked up the Fort Bragg garrison the next day, and arrived at the Presidio of San Francisco on October 20. This constituted the permanent evacuation and abandonment of the post. The Mendocino Indian Reservation was discontinued in March 1866, and tile land opened for settlement several years later.

Town of Fort Bragg grew up on Army site after area was opened to settlement in 1867. It is on State 1 about 150 miles north of San Francisco. Parade ground was bounded by modern Laurel Street on north between Franklin and McPherson; point about 100 feet south of Redwood street was southern boundary. Main street bisects parade somewhat west of center; state marker for fort is on stone near hospital site at 321 Main Street.