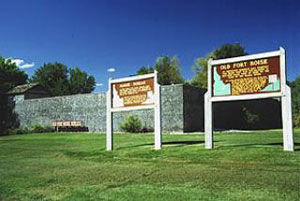 In 1834 Thomas McKay, an associate of the Hudson Bay Company, built a fort on the east bank of the Snake River. By 1843, it had become a haven for many travelers along the Oregon Trail. A flood destroyed the original adobe buildings in 1853 and the site was abandoned. Parma's Old Fort Boise on the eastern edge of town has a replica of Fort Boise, a museum and an authentic pioneer cabin. An RV park, picnic area and campground are available near the park.

To the southwest of Fort Boise the Castle Creek fight occurred which Gregory F. Michno describes in his book, Encyclopedia of Indian Wars. 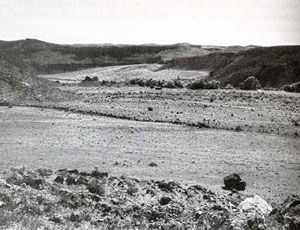 9-10 September 1860, Grand View, Idaho: Elijah P. Utter's wagon train consisted of the Utter family, three other families, six single men, and six ex-soldiers recently discharged from Fort Hall. Though a relatively small train, the 8 wagons, 100 oxen, and 44 travelers, 16 of whom were adult men, appeared to be strong enough to make it to Oregon. Traveling along the Snake River, the party reached the mouth of Castle Creek, about 12 miles downriver from present-day Grand View, Idaho, early on 9 September. There, a cloud of dust ahead warned of approaching Indians.

Utter corralled the wagons on high ground overlooking the river. A band of Bannocks circled around, shooting, for an hour, then they approached waving a white flag. The Indians indicated that they were hungry, and Utter let some of them inside the corral and fed them. The Bannocks thanked the emigrants and made signs that they could proceed, but when Utter strung the wagons out along the road, the warriors attacked again.

Three men, including the driver of the lead wagon, quickly lost their lives as Utter circled the wagons again. Throughout the day and into the night, the Bannocks besieged the emigrants, and they were still there the next morning. In need of water, Utter tried to move the wagons to the river, but the Indians hit them again, killing another man.

At that point, four of the ex-soldiers and two other men, the Reith brothers, mounted horses and galloped away, leaving the rest of the train to their fate. The part broke up and ran for the thickets along the river. Elijah and Abagel Utter, four of their children, and another man were killed. The Bannocks, busy looting the wagons, left the remaining 27 emigrants alone in their hiding places along the river.

In all, 11 emigrants died in the attack. The survivors took various tragic treks down the Snake. A few wandered away; Indians killed or captured others; and some died of starvation and were eaten by their companions. There were no known Bannock casualties.