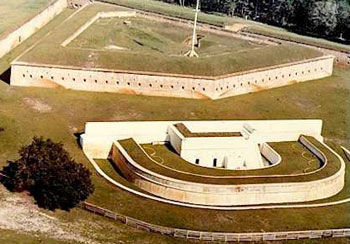 Fort Barrancas sits on a bluff overlooking the entrance to Pensacola Bay. The natural advantages of this location have inspired engineers of three nations to build forts. The British built the first fort on this site, the Royal Navy Redoubt, in 1763. A Spanish fleet under Bernardo de Galvez sailed past it in 1781 to capture Pensacola. The Spanish built a stronger fort, completed in 1797, called San Carlos de Barrancas. Barranca is a Spanish word for a bluff.

After the War of 1812, the U.S. decided to build forts at all major harbors. When Florida was added to the country in 1821, Pensacola was selected for a navy yard. To protect that yard, four forts would be built: Pickens on Santa Rosa Island; McRee on Foster's Bank; Barrancas and Advanced Redoubt on the mainland. The work went on for thirty years beginning in 1829.

Forts worked well because cannon and ships were still simple. Sailing ships were slow and easily damaged. Cannon fired round balls to batter walls. Against the massive masonry walls of a fort, ships' guns could do little damage, while the fort's guns could destroy a wooden ship. With such forts at our harbors, no nation would dare to attack. Once the forts were built and armed, it was not even necessary to man them. This allowed a young country to defend itself without maintaining a large army in peacetime.

The American fort used the old Spanish water battery as a base, strengthening the walls and adding a rifle gallery on top. The old wooden fort on the bluff was replaced with a much stronger brick design by Joseph Totten. Major W.H. Chase supervised the work, done by contracted slaves. Six million bricks were purchased locally. Built from 1839 to 1844, the most unique feature is found in the interior walls, which are supported by sand filling open-ended arches against curved retaining walls in the galleries. This system uses the natural slope of the sand to relieve pressure on the outer walls.

In 1861, only one company of artillery was assigned to the forts at Pensacola. When civil war threatened, these 50 men, under Lt. Adam Slemmer, moved from Fort Barrancas to Fort Pickens. State troops occupied Barrancas. The forts exchanged heavy gunfire in November of 1861 and January of 1862. Confederates abandoned the Pensacola forts in May of 1862.

New cannon and ironclad ships of the Civil War made masonry forts obsolete. Barrancas was armed with new guns in 1894, but its job was taken over by new concrete forts built around Forts Pickens and McRee beginning in 1896. The old fort was used as a signal station, small arms range, and a storage area in later years. The Fort Barrancas Army Post, east of the fort, became headquarters for the 13th Coast Artillery Regiment. New weapons of World War Two finally made all coast artillery obsolete for the U.S., and the Army turned the area over to the Navy in 1946. The fort became a part of Gulf Islands National Seashore in 1971. Following eighteen months of restoration costing $1.2 million and using 90,000 new bricks, the fort was reopened in 1980 by the National Park Service.

The earthen slope hides the fort from land-based artillery. Masonry forts were only effective against ships. An army conducting a siege could capture a fort in two weeks.

The main walls (scarp) are 20 feet high and 4 feet thick, providing defense against both ships and infantry. The outer walls (counterscarp) support the glacis, and contain cannon sighted to fire down the ditch.

A dry moat surrounds the fort. Assaulting infantry entering the ditch would suffer heavy casualties from muskets and cannon firing through windows in the walls.

Operated by counterweight and winch, it pivots at the center. It could be raised to prevent a surprise attack, which saved Lt. Slemmer's men in 1861.

The entrance is guarded by heavy oak doors. A small wicket gate allowed entry without opening the main doors.

Normally, only a guard detail of six men stayed in the fort. The main barracks were to the east of the fort.

A series of arches support the sand fill and allow access to loopholes for muskets. Vents at the top allow smoke from the guns to escape.

A tunnel under the ditch leads to this wall, containing loopholes, cannon emplacements, and powder magazines.

The center of the fort held a shot furnace for heating cannonballs, marked by a brick foundation. The well is in the northeast corner. The rampart once mounted 19 cannon. The tunnel under the flagpole leads to the water battery.

First built by the Spanish, guns here could ricochet shot off the water to hit ships near the waterline.

No public transportation is available in the Florida District.

Coast Transit Authority (CTA) buses stop outside the entrance to Davis Bayou at the Sav-A-Center on US-90 and Ocean Springs, MS Road. In Gulfport, MS CTA buses will, upon request, driver through the Yacht Harbor and drop off persons taking the Ship Island Ferry.