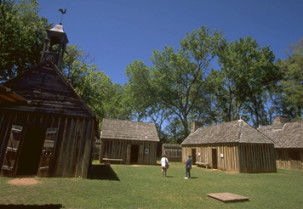 It's located on the banks of the Cane River between downtown Natchitoches and Northwestern State University, minutes from I-49. Facilities include the fort replica with the addition of modern restrooms. Groups are requested to arrange a tour.

Outpost on the Edge of an Empire

Natchitoches was founded by a French Canadian, Louis Antoine Juchereau de St. Denis, in 1714 while he was en route to Mexico from Mobile, Alabama, on a trade mission. When he reached the village of the Natchitoches Indians on the Red River, he had two huts constructed within the village and left a small detachment there to guard the stores and trade with the inhabitants. This became the first permanent European settlement in the territory later known as the Louisiana Purchase.

In 1716, Sieur Charles Claude Dutisné was sent to Natchitoches with a small company of colonial troops to build and garrison an outpost that would prevent the Spanish forces in the province of Texas from advancing across the border of French Louisiane. This strategic outpost was named Fort St. Jean Baptiste des Natchitoches. Economically, Natchitoches evolved into a primary French trade center in the Lower Mississippi Valley. Native American tribes of the three Caddo Confederacies played a vital role in establishing trade and communication links among the French, the Spanish and the Native Americans of the region. The trade that developed with the Caddos forever changed the material culture of the tribes, and by the mid-18th century they were almost completely dependent upon French trade goods. The diplomatic success of the fort was assured when St. Denis was named commandant in 1722. His influence would thrive in the colony until his death in 1744.

A detailed drawing made in 1733 by the French Engineer-in-Chief Sieur Ignace Francois Broutin shows the improvements made to Fort St. Jean Baptiste. In August 1732, Broutin was sent by the Commissary General of Louisiane "to see what had to be done to the fort and to put this garrison in security," which was then menaced by the Natchez Indians. Upon his arrival, he found St. Denis "had the stakes of the enclosure changed from top to bottom by the soldiers and inhabitants and redoubled inside by the other smaller ones." This produced a palisade of double thickness, an unusual feature in colonial Vauban fortifications.

Broutin remained in Natchitoches until the end of the year, during which time he constructed a "crude barracks, a warehouse and a house for the warehouse keeper." No sooner had the construction begun than the Spaniards of nearby Los Adaes protested that it was an invasion of Spanish territory, a protest that St. Denis politely acknowledged and ignored.

Between 1716 and 1762 the fort was garrisoned by independent companies (Compagnies Franches de la Marine). Functioning under the Ministry of the Marine, they were charged with the administration and defense of the French royal colonies. Marines served dual duties as soldiers and policemen in the small frontier settlement. While most of the enlisted men of the companies were recruited in France, young aristocratic Canadians served as officers. Many settled in Natchitoches before or during their enlistment, or after their enlistment expired, as it was the Ministry's intent that these Marines become part of the community they served. In addition to the average 40-man companies, the fort included an ordnance consisting of two four-pound naval guns and two one-pound wall-mounted swivel guns.

The French Withdrawal from Louisiana

The fort continued to serve as a military outpost and commercial trade center until 1762, when France's defeat by England in the French and Indian War forced her to cede the Louisiana colony to Spain. Under Spanish authority, the fort served as a trade center and a link in Spain's intracolonial communications network. But since its original purpose of protecting a territorial boundary no longer applied, the Spanish eventually abandoned the fort. The fort was in such ruins by the time the United States acquired the area in the Louisiana Purchase (1803) that the Americans could no longer use it, so they built Fort Claiborne nearby.

The site obtained for the replication of Fort St. Jean Baptiste is located on Cane River Lake (formerly the Red River) a few hundred yards from the original fort site. The fort replication was based upon Broutin's plans and on extensive archival research in Louisiana, Canada and France. Construction began in 1979 under the direction of the late Samuel Wilson, Jr. and the Louisiana Office of State Parks. Building materials were obtained locally, and many 18th-century techniques were employed in the replication. Nearly 2,000 treated pine logs form the palisade and approximately 250,000 board feet of treated lumber went into the construction of the buildings. All of the hinges and latches were handmade at a nearby foundry. Further historical research is ongoing.

With the completion of Fort St. Jean Baptiste State Historic Site, the Office of State Parks initiated an interpretive program that provides the visitor a unique opportunity to experience our early colonial history. Each year, the park hosts several 18th-century living history encampments and programs in which the multicultural heritage of the colony is interpreted for the visitor.

We hope that your visit to Fort St. Jean Baptiste State Historic Site will give you a better understanding and appreciation of the customs and cultures of the early inhabitants of Louisiana.