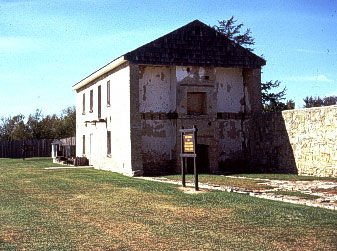 What Was This Fort?

Fort Atkinson was built to keep the Winnebago Indians on Neutral Ground (a 40-mile-wide strip of land established by the Treaty of 1830) after their removal from Wisconsin in 1840, and to provide protection for them from the Sioux, Sauk, Fox and from white intruders on Indian land.

On May 31, 1840, a camp was made on the site of the future fort. The camp was named Atkinson in honor of the commanding officer in charge of the Winnebago resettlement efforts. Of the six years regular army troops were garrisoned at Fort Atkinson, half were spent garrisoned at Fort Atkinson, half were spent constructing the fort. Despite crowded conditions, the fort was essentially complete by the end of summer, 1842. It included 24 buildings and a stockade wall. Outside the 11'9" wall were 14 additional buildings.

On June 20, 1846, the regular army troops were pulled out of Fort Atkinson to fight in the war with Mexico. On July 15, 1846, Iowa volunteers staffed the fort and continued to carry out their duties until the post was abandoned. In June, 1848, the Winnebago Tribe was removed from Iowa just as they had been from Wisconsin. With their removal from Iowa, the reason for Fort Atkinson was removed as well and the last company of infantry marched out of its gates on February 14, 1849. *Excerpts from the Fort Atkinson Technical Report, by Bradley Williams.

The Fort As A State Preserve

The state of Iowa acquired the fort in 1921 and reconstruction was started in 1958. In 1968, the fort was dedicated as part of the State Preserves System because of its geological, archaeological and historical value. The fort is located in the city of Fort Atkinson, Iowa.

The annual rendezvous has been held during the last full weekend of September at Fort Atkinson State Preserve in northeast Iowa since 1977. The event recreates life on the 1840s Iowa frontier with authentic buckskinners, U.S. Army dragoons, black powder shoots, crafts people, contests and demonstrations.

Although trappers' rendezvous was an event which actually took place in the mountainous west and not in Iowa, the presence of an authentic frontier fort gives 20th century Iowans the opportunity to witness what frontier life in the 1840s might have been like, had there been such a gathering at Fort Atkinson. With the Neutral Ground closed to all but authorized people, visitors to the fort were few.

Crafts people will be working to produce goods needed in frontier everyday life. Buckskinners provide lively trade from blacksmiths, leather goods, weaponry and "fooferaw" (beads, trinkets, etc.). These trade goods are intended for an 1830-1840 lifestyle. Foods of the period are cooked over open fires and contests spring up which test actual skills. You may even be lucky enough to hear some folk music from the frontier period. Representative regular army troops who manned the fort from 1840 to 1849 are present and carry out routine fort duties.