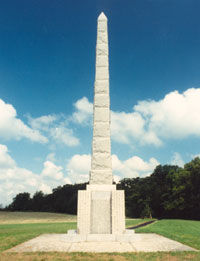 Originally built in the fall of 1812 by Kentucky troops under the command of Lt. Col. Robert Pogue, the fort was enlarged to almost double the original size during the spring of 1813 by Ohio militia soldiers under the command of Capt. Daniel Hosbrook. A fifth blockhouse was added during the second phase of construction as well as several cabins and storage buildings. The walls stood 11 feet above the ground.

Located on the banks of the Auglaize River, Fort Amanda served as a major supply depot during the war. A diary kept by Ensign William Schillinger of the Ohio militia gives us a daily account of weather conditions, activities at the fort and his personal thoughts and observations.

These and other recently discovered writings have given us the names of every man stationed at Fort Amanda during its operation, including the first African-American in the area - David, Pogue's servant whom he brought with him from Kentucky.

Fort Amanda is on the west bank of the Auglaize River 9 miles northwest of Wapakoneta along State Route 198 in Auglaize County.