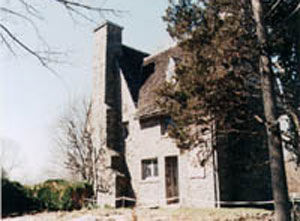 The Henry Whitfield House was built in 1639 when Guilford was first settled by Puritans fleeing religious persecution in England. They sailed directly to New Haven, settled in 1638, and proceeded to purchase the land known as Menuncatuck from the local tribe.

The Old Stone House was the home of Guilford's first minister, Henry Whitfield, and also served as a defensive stronghold for the community. Local legend has it that church services were held here before the construction of the first meeting house in 1643. However, Whitfield and other town leaders probably met here often, the house was not large enough for the entire community to worship in.

In 1650, Henry and his family returned to England during the Counter Migrations. He took a position under Oliver Cromwell in the newly-empowered Puritan church and died in 1657. The Whitfields later sold the Guilford house to the Thompson family, absentee landlords who managed their property in the colonies as a tenant farm until the 1770's.

From 1776 to 1900, the Griffing and Chittenden families (related through Marriage) owned the Whitfield House. Prominent Guilford citizens and successful business owners, they lived in the house at various times, rented it to tenant farmers, and possibly used the site for offices and warehouses. In the 1860s, they allowed St. George Catholic Parish to meet in the house until their church was built. The Chittendens heavily remodeled and expanded the building in 1868. Sarah Chittenden Clone sold the house to the State of Connecticut in 1900.