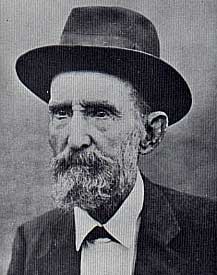 During November of 1874, while Scott Cooley and Wm. Treweck were hunting a beef in Menard County for the rangers, they discovered about eleven Indians. Major John B. Jones, who was moving southward, was at a camp about six miles away. Treweck was told by Scott Cooley he could "loose-heard" the Indians while the former went to camp for reinforcements. Finally, however, Scott Cooley's horse was wounded in the knee, so he, too, went to the camp. Treweck had already gone with a part of the command, and Cooley took another. Among those that went along were Capt. Dan Roberts, B. Cowen, W.W. Lewis, Henry Sackett and seven or eight others. The Indians' trail was found where Cooley left them and followed to where the savages killed a beef. The rangers encountered the Indians about fifteen miles south of Menard. The warriors threw themselves in battle formation, and Captain Dan Roberts, who was then Lieutenant, killed a chief. Another Indian was also killed. So the remaining savages became demoralized and began to run. After they were followed two or three miles farther, a third Indian was killed and one captured. The savages were then followed considerably farther, and two more of their number murdered. So five Indians were killed and one captured.