In late 1860, Houston authorized new Minutemen company of Rangers to be organized for the protection of the Indian frontier and he placed Col. William C. Dalrymple in charge. The following account is from the book, Frontier Defense in the Civil War by David Paul Smith:

By mid-February Dalrymple located his own company in the vicinity of his new headquarters near the junction of Hubbard's Creek and the Clear Fork of the Brazos, in Stephens County, about midway between the Comanche and Brazos Indian agencies. He established the companies of his battalion on a general north-south line extending from his headquarters: Captain Burleson's company on the upper San Saba River, in two camps twenty-five miles apart; Capt. Curtis Mays near the mouth of the San Saba, covering the ground between that point and Pecan Bayou; Capt. Thomas Harrison's company reinforced Dalrymple's force at Hubbard's Creek; Capt. David L. Sublett's company on Elm Creek; and E. W. Rogers's company along Lost Valley Creek in Jack County, patrolling from that point to the Red River. Attached to this force was an "Indian Spy Company" led by Capt. Peter Fulkerson Ross, older brother of Sul Ross. This company, organized on July 1, 1860, consisted of thirty-five "spies" and ten "guides," mostly Tonkawas, who remained in Texas in service to the state.

A period of transition in frontier defense, began amidst confusion in early 1861, as southern states followed South Carolina's lead and passed ordinances of secession. After Lincoln's election groups of secessionists held rallies across the state, condemned Lincoln's coming "abolitionist" government, and broke up meetings of Unionist sympathizers. As advocates of secession clamored for a secession convention, many of them began to organize military units in towns across Texas. Rumors abounded that John R. Baylor was in the process or organizing one thousand men for a "buffalo hunt," believed to be a pretense to seize U.S. Army headquarters at San Antonio, should Texas leave the Union. 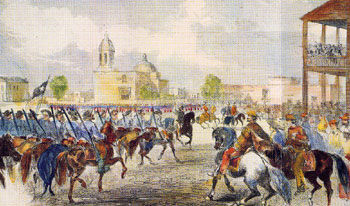 Smith points out that Department of Texas Commander General David Twiggs twisted and turned to fend off the responsibility of his office as secession approached. Finally the seventy year old asked his only senior officer Winfield Scott to relieve him of duty. Meanwhile a Texas Secession Bill passed on February 1st and frontier leaders didn't wait for a vote to guarantee their frontier defenses. Under a Lone Star flag, Ben McCulloch led a small army into San Antonio and took possession of the U.S. Army's facilities. This practice continued through the inauguration of Lincoln and without a little luck the first shots of the Civil War would have been fired in Texas instead of South Carolina. By the summer Col. Young had secured U.S. forts in Indian Territory.

The following is from the book, Frontier Defense in the Civil War, by David Paul Smith: 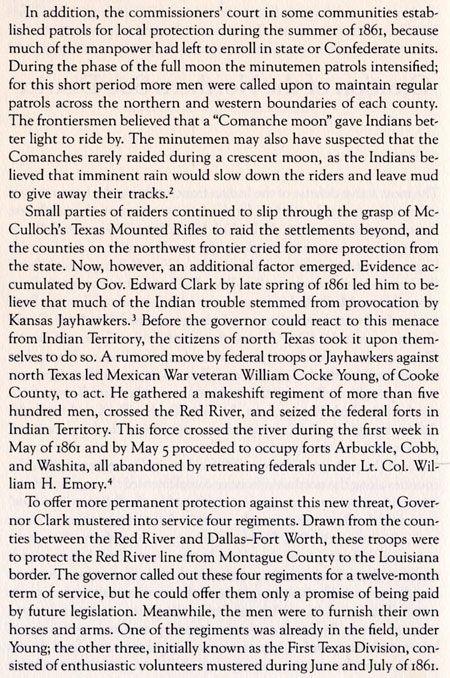 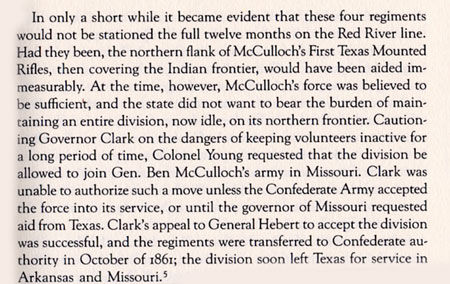 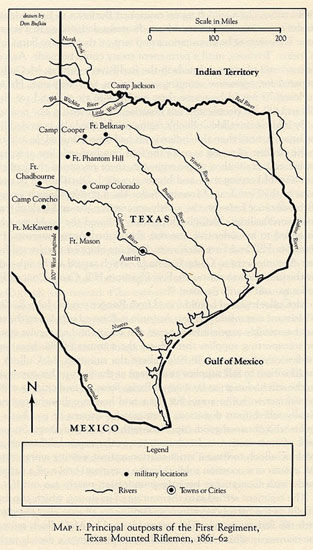 The Confederate Army's Texas Mounted Riflemen departed for scouting expeditions, accompanied by friendly Tonkawa scouts, where they were instructed to "chastise" the hostile Kiowa and Comanche tribes. Stanley S. McGowen describes their experiences in his book, Horse Sweat and Powder Smoke. 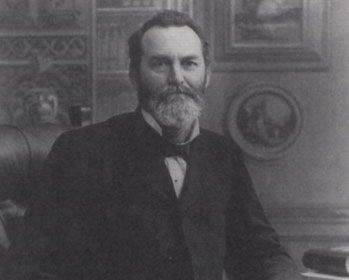 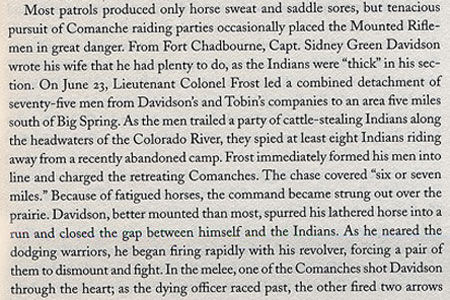 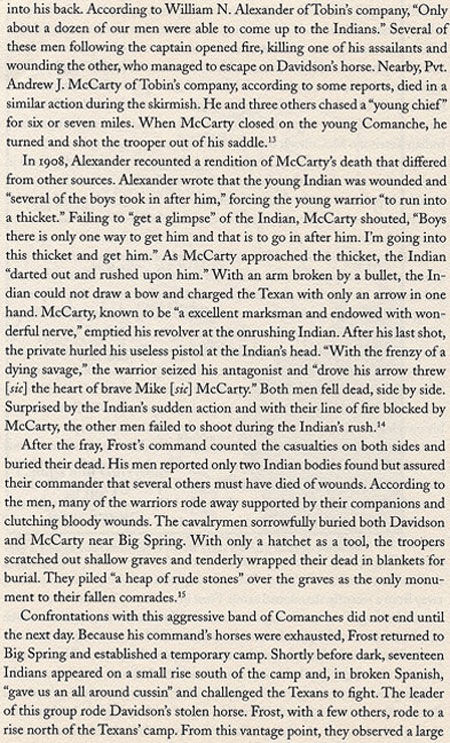 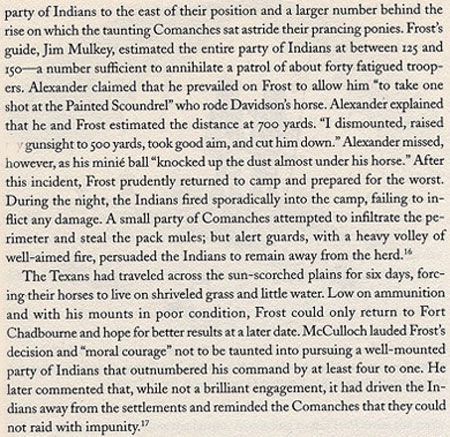 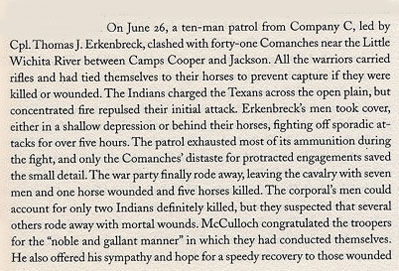 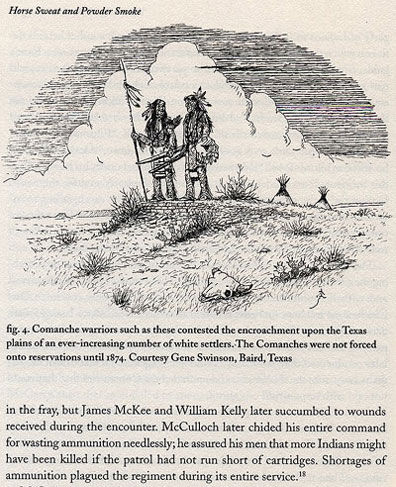 In 1861, at about this same place, a little south of the Red River and west of the Big Wichita, Confederate Camp Jackson was established at the outbreak of the Civil War. Stanley S. McGowen, in his book Horse Sweat and Powder Smoke, describes a Texas Mounted Rifles punitive drive into Indian Territory led by Col. Henry E. McCulloch with the aid of scout Charlie Goodnight. 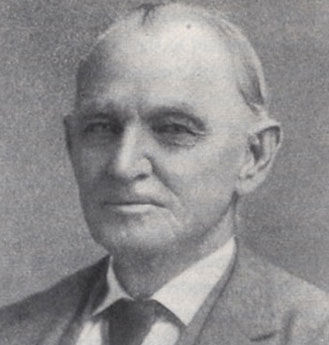 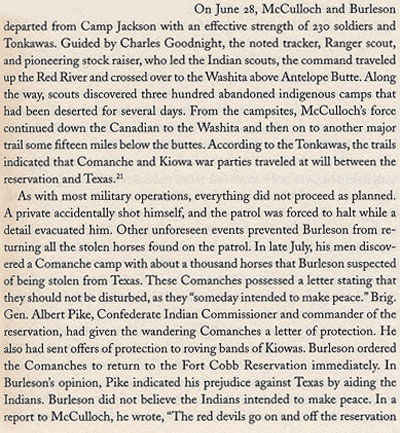 The Confederate military continued to fight off Indians in this region during the Civil War. In Horse Sweat and Powder Smoke, Stanley S. McGowen narrates the experiences of the First Texas Cavalry in 1861. The following passage relates the stories of the First Regiment of the Texas Mounted Rifles when they were stationed at Fort Chadbourne:

In the fall of 1861, Confederate Colonel Henry McCulloch ordered his Texas Mounted Rifles on an extended scout west of the settlements. They score a victory against the Comanches on the Pease River. The following is from the book Horse Sweat and Powder Smoke, by Stanley S. McGowen: 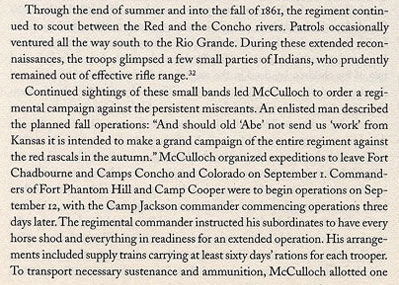 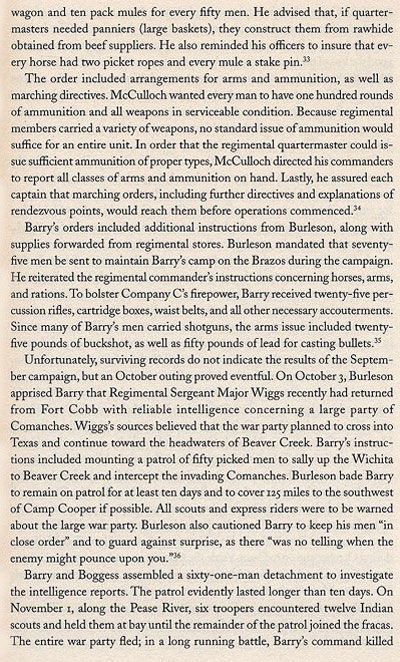 The last action seen by the Texas Mounted Rifles occurred in the early spring of 1862.