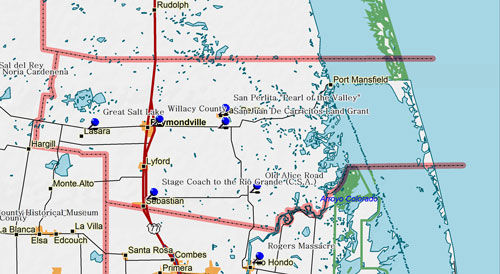 Marker Title: Old Alice Road
City: La Jarita
County: Willacy
Year Marker Erected: 1997
Marker Location: 1 mi. N. of Santa Monica on FM 1420; 3 mi. E of La Jarita.
Marker Text: Once used by Indian tribes, then widened by Mexican oxcarts and Spanish expeditions, this trail has been called the Old Alice Road since its establishment as a stagecoach line from San Antonio to Brownsville in the 1860s. It was the main route between Brownsville and central and east Texas. Dubbed "The Cotton Road" in the Civil War, when Union troops blockaded Texas ports, this was the route by which cotton was moved down to Mexico. When the railroad arrived in south Texas in 1904, the old stage route fell into disuse. By the late 20th century, only impressions of the trail remained. (1997)

Marker Title: San Juan De Carricitos Land Grant
Address: SH 186, E of Raymondville
City: Raymondville
County: Willacy
Year Marker Erected: 1988
Marker Location: From Raymondville, take SH 186 E. about 12 mi.
Marker Text: The largest land grant in South Texas, the San Juan de Carrictios lands were awarded to Don Jose Narciso Cavazos in 1792 by the King of Spain. Comprising over one-half million acres, the grant included virtually all of present Williacy County, including the sites of the towns of Sebastian, Lyford, Raymondville, Lasara, San Perlita, and Port Mansfield. In 1793 Cavazos took formal possession of the land grant seven miles north of this site. Most of the grant was later sold by Cavazos' heirs, although some descendants still live within its boundaries. (1988)

San Perlita, "Pearl of the Valley"

Marker Title: San Perlita, "Pearl of the Valley"
Address: FM 2209, Hollywood Park
City: San Perlita
County: Willacy
Year Marker Erected: 1984
Marker Location: Hollywood Park, FM 2209 R.O.W., San Perlita
Marker Text: Part of the Carricitos land grant issued in 1790 by the King of Spain to Jose Narcisso Cavozos, this agricultural community and the surroundings farmland were developed soon after the Missouri Pacific Railroad extended a branch line to this area in 1926. The San Perlita Development Company cleared more than twenty thousand acres of land for growing staple, vegetable, and citrus crops and laid out the townsite of San Perilta. Since its development, the area has made significant contributions to the quality of life in this part of the Rio Grande Valley. (1984)

Historical and Community Center of Raymondville

Marker Title: Stage Coach to the Rio Grande (C.S.A.)
Address: US 77 & FM 1018
City: Sebastian
County: Willacy
Year Marker Erected: 1965
Marker Location: Bus. 77 at FM 1018, about 1 mi. north of Sebastian
Marker Text: About 10 miles east of this site during the Civil War was Paso Real, ferry point on Arroyo Colorado. As early as 1846, stagecoaches had gone over Paso Real Ferry (the name probably meant "The King's Pass"). In the 1860s, the spot had international importance. It was a crossing for the Cotton Road, lifeline of the Confederacy. When Federal coastal blockades had cut off imports and exports for the entire south, this road moved cotton down to Matamoros so that it could be exchanged for guns, ammunition, medicines, cloth, shoes, blankets and many other vital goods. Besides the prized cotton loads that went past Paso Real, the stagecoach connection there was of importance of Confederate and foreign businessmen, government agents, diplomats and army personnel. This was an area of conflict and intrigue. Bandits and army deserters watched the road for stages and cotton wagons to pilfer. Mysterious travelers went this way--sometimes with a pursuing sheriff on the next stage. Of 31 stagelines in Confederated Texas (hauling mail, soldiers, civilians), no other was more vital or more interesting to travel than this through Paso Real. (1965)