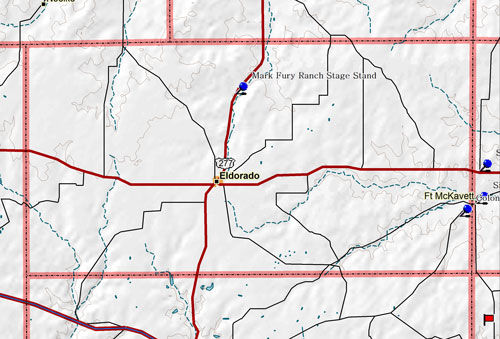 Marker Title: Christopher Colombus Doty
Address: US 277, about 15 mi. N of Eldorado
City: Eldorado
County: Schleicher
Year Marker Erected: 1968
Marker Location: On US 277, about 15 miles N of Eldorado
Marker Text: (April 16,1857-October 26,1944) First Permanent Citizen of Schleicher County. Came to Texas from Missouri, 1879. Soon bought headquarters at Ten-Mile Water Hole (1/2 Mi. East). Drilled first water well in county, 1882, and erected first windmill south of Concho River, thus established area's agricultural industry. The organization of the county in 1901 included his property and he was elected first tax assessor-collector. Later was justice of the peace, a rancher, active Methodist and a Mason. He married Alice Pancost on June 3, 1887 and they had one daughter, Annie Marie. (1968)

Marker Title: Site of J.D. Earnest Ranch Stage Stand
Address: US 277 about 10 mi. S of Eldorado
City: Eldorado
County: Schleicher
Year Marker Erected: 1980
Marker Location: On US 277, 10 Miles S of Eldorado
Marker Text: During the ownership of rancher J.D. Earnest, this site was used as a rest stop on the stage line between San Angelo and Sonoro. Owned and managed by Therodore Jackson Savell (1872-1954), the operation began providing mail and passenger service to the area in 1894. Each weekday, two stages pulled by four horses made the 75-mile run, on rare rainy occasions the stagecoach up muddy hills. The Savell Line remained in operation until 1909, when mail was first delivered to the county by automobile. (1980)

Marker Title: Site of Mark Fury Ranch Stage Stand
Address: On US 277, about 16 mi. N of Eldorado
City: Eldorado
County: Schleicher
Year Marker Erected: 1980
Marker Location: On US 277, about 16 miles N. of Eldorado Marker Text: Originally part of the Mark Fury Ranch, this site was used as a stagecoach stop from 1894 to 1909. Theodore Jackson Savell (1872-1954) owned and operated the line between San Angelo and Sonora. Six mornings each week a horn was blown to announce the arrival of the stage. In emergencies on the road, help was prompt because the line served as a thread of life for the remote area. The Savell Stages were instrumental in the early development of the region, providing passenger, mail, and express services. (1980)

Marker Title: Site of Verand
Address: US 277, about 5 mi. N of Eldorado
City: Eldorado
County: Schleicher
Year Marker Erected: 1968
Marker Location: On US 277, about 5 miles N of Eldorado
Marker Text: Flags of six different countries have been raised over Texas. In 1519 the land was claimed for Spain, whose explorers came later in search of silver and gold, but found buffalo, Indians and mirages. They planted the red and gold banner of Spain, with its lions and castles, beside the cross of the missionaries intent on converting the Red Men. 95, In answer to an offer of free land by Eldorado founder W.B. Silliman, they moved five miles south to the new town. The site of Verand soon returned to its natural state. (1968-1996)