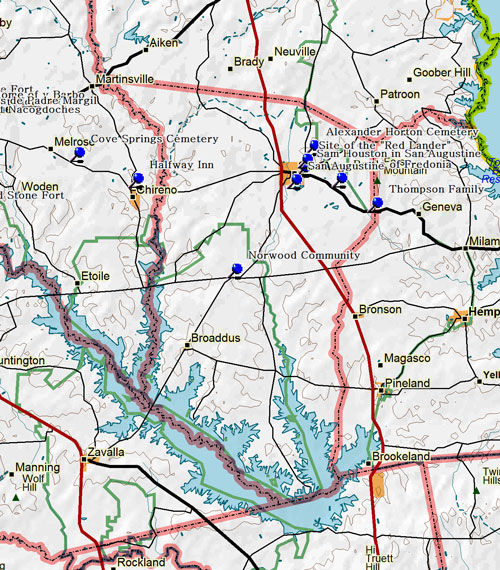 Site of Battle of Fredonia

Marker Title: Site of Battle of Fredonia
City: San Augustine
County: San Augustine
Year Marker Erected: 1966
Marker Location: 3 mi. east of San Augustine on SH 21
Marker Text: Climax of first Anglo-American rebellion in East Texas. In 1826 colonizer Hayden Edwards defied expulsion orders of Mexico and founded Republic of Fredonia-- raising flag of "Independence, Liberty and Justice." When Ayish Bayou settlers refused to join, he ordered their banishment. Fredonians, from log fort at this site, were ordered to take Ayish Bayou on Jan. 21, 1827. That day, however, without a shot, Stephen Prather's 9 white men and 60 Indians took the fort and 200 soldiers. At news of this, Edwards fled to the U.S., ending the Fredonian Rebellion.

Marker Title: Bodine Place (Medallion) Built in 1886
City: San Augustine
Year Marker Erected: 1962
Marker Location: SH 147m 4 mi. N., then 2 mi. W.
Marker Text: This is the third Bodine house on this site. The original builder was with Commodore Perry on Lake Erie, and one son in each succeeding generation has been named Oliver Hazard Perry Bodine, the name of the builder of this house.

Marker Title: Alexander Horton Cemetery
City: San Augustine
County: San Augustine
Year Marker Erected: 1977
Marker Location: 1.5 mi. north on SH 147 from San Augustine
Marker Text: Pioneer, soldier, civic leader, and state legislator, Alexander Horton (1810-1894) came to Texas in 1824. He served as an aide-de-camp to Gen. Sam Houston at the Battle of San Jacinto, April 21, 1836. This cemetery is situated on property Horton bought in 1837. His home once stood adjacent to the plot. According to family tradition, the first grave here was that of Horton's brother William Wade, a Texas Ranger who died in 1849. Maintained by descendants, the cemetery contains about 20 graves, including those of Horton and other family members.

Marker Title: Sam Houston in San Augustine
Address: 128 E. Columbia
City: San Augustine
County: San Augustine
Year Marker Erected: 1998
Marker Text: Sam Houston (March 2, 1793 - July 26, 1863) left home in 1809 and lived among the Cherokees. After two years he returned to the Anglo world; he opened a school, fought the British under Andrew Jackson, and was governor of Tennessee. After a three-week marriage, Houston left the governorship and returned to the Cherokees; three years later, he came to Texas. Upon his arrival in San Augustine, Sam Houston opened a legal practice on this site. For the next thirty years he used "The Redlands" as a place of business, residence, or refuge. Houston is said to have recuperated from the Battle of San Jacinto in the home of Colonel Phillip Sublett, issuing his report of the battle from San Augustine. Following Houston's term as president of the Republic of Texas, the people of San Augustine elected him to serve them in the Texas House of Representatives during the Fourth and Fifth Congresses. Houston's divorce from Eliza Allen took place in San Augustine in 1837. He married Margaret Lea in 1840; though her health would not permit her to live in San Augustine, she made frequent visits. The early and strong support of the people of "The Redlands" for Sam Houston and Houston's love for them is documented in the history and lore of San Augustine and its people. (1998)

Marker Title: Mission Nuestra Senora de los Dolores de los Ais Site
City: San Augustine
Year Marker Erected: 1936
Marker Location: SH 147, .5 mi. S.
Marker Text: Established in 1716 by Padre Fray Antonio Margil De Jesus. Here faithful Franciscans labored for the purpose of civilizing and Christianizing the Ais Indians. Abandoned temporarily due to the French incursions from Louisiana in 1719. Restored by the Marquis of Aguayo in 1721. The mission also served to confirm the claim of the King of Spain to the Province of Texas.

Marker Title: Norwood Community
City: San Augustine
County: San Augustine
Year Marker Erected: 1997
Marker Location: 11 mi. south of San Augustine near Texas 103 and Texas 147, Norwood.
Marker Text: This rural community was settled in the 1840s by William Coleson (W. C.) Norwood (1794-1885) and Eliza LeGrand Norwood (1808-1869). They migrated from North Carolina, where W. C. was a merchant and postmaster in the town of Norwood. The Norwoods were accompanied to Texas by their nine children and extended family members. Eliza Norwood's brother, E. O. LeGrand, a veteran of the Battle of San Jacinto and signer of the Texas Declaration of Independence, became a member of their household in the Norwood community. W. C. Norwood served as San Augustine County commissioner and was instrumental in building early county roads. James L. Norwood, son of W. C. and Eliza Norwood, also served as San Augustine County commissioner. The Norwood community included a cotton gin, grist mill, syrup mill, and a sawmill built by Hampton L. Norwood. E. O. Norwood, another of W. C. and Eliza's sons, became the town's doctor. In 1892 a school was established on one acre of land deeded by James Norwood. His daughter Cora donated land for a church in 1926. The community also included a grocery store, houses, and a cemetery. Norwood family members remain in the area, and continue to own land that once belonged to their ancestors. (1997)

Site of the "Red Lander" Office

Marker Title: Site of the "Red Lander" Office
Address: Columbia and Montgomery
City: San Augustine
County: San Augustine
Year Marker Erected: 1968
Marker Text: One of the most influential newspapers in the Republic of Texas during the 1840s. W. W. Parker bought equipment of "Texas Chronicle," Galveston, and brought it here in 1837. He published the "Red Lander" for three years. Dr. John S. "Rip" Ford, the celebrated journalist, Texas Ranger, and Confederate officer was on the staff. Alanson W. Canfield bought the paper June 12, 1840. Published a comprehensive weekly journal of wide circulation until 1853. Later, papers in other cities gained in prestige; this led to demise of the "Red Lander," 1861.

Marker Title: San Augustine
City: San Augustine
County: San Augustine
Year Marker Erected: 1966
Marker Location: US 96 south of US 96 and SH 21 on east side of road
Marker Text: An early eastern gate to Texas, in area claimed in 1600s by both France and Spain. To back her claim, Spain in 1691 chartered from Mexico past this site El Camino Real (The King's Highway) and established nearby in 1717 Mission Dolores de los Aies. Inhabited by Ayish Indians and Spaniards until the late 1790s, when Richard Sims came and was soon followed by John Quinalty, Edmond Quirk and families of Broocks, Cullens, Cartwrights, Hortons, Hustons, Prathers and others. By 1824 the settlement had a water mill to grind corn meal; in 1826, a cotton gin. In the 1827 Battle of Ayish Bayou, Col. Prather and 69 men put down Fredonian uprising over land titles. The town was laid off in 1833 by Thomas McFarland. In 1836 it sent as delegates to sign Declaration of Independence S.W. Blount and E.O. LeGrand; fielded 3 companies to fight in the war for independence. Its Republic of Texas statesmen included vice-president K.L. Anderson; J.A. Greer, Secretary of the Treasury; Wm. Holman, congressman; J. Pinckney Henderson, minister to England and France, and later the first governor of the state. Oran M. Roberts was 16th governor. Home of the 1965 United States Ambassador to Australia Edward Clark. Many historic sites are marked. (1966)

Marker Title: San Augustine County Courthouse
Address: Columbia at Broadway (SH 147) streets
City: San Augustine
County: San Augustine
Year Marker Erected: 2001
Marker Location: Courthouse square, Columbia at Broadway (SH 147) streets.
Marker Text: San Augustine County Courthouse When the town of San Augustine was platted in 1834, this property was reserved for the public square, but it was another 20 years before the first courthouse was constructed here. San Augustine was one of the 23 original counties established after Texas won independence from Mexico in 1836. Early courts were held in the Mansion Hotel, and by 1840 the county government operated out of the federal custom house. In 1854, San Augustine County built its first courthouse on the public square. The subsequent courthouse, an 1890 Italianate structure, was razed to make room for the current building. Completed in 1927, the third San Augustine County Courthouse is constructed of Texas lueders stone. It is symmetrical in plan with a prominent central entry bay and exhibits influences of the Classical Revival style of architecture. The County Commissioners Court, with county judge Ed Kennon presiding, selected East Texas architect Shirley Simons as the designer and the firm of Campbell and White as the builders. Over the years, the square has been a gathering place for community and county events. Monuments placed on the grounds include a bronze statue of James Pinckney Henderson, first governor of the state of Texas and a resident of San Augustine; and a veterans memorial erected in 1951. The 1927 courthouse stands as a center of politics and government for the people of San Augustine County and an important part of the city's 20th-century architectural heritage. Recorded Texas Historic Landmark - 2001

Marker Title: Thompson Family
City: Chapel Hill
County: San Augustine
Year Marker Erected: 1987
Marker Location: SH 21 at Chapel Hill (cemetery), 7 mi. east of San Augustine.
Marker Text: Dr. Samuel (1765-1843) and Precious Wofford (d. 1841) Thompson and their sons were among the earliest settlers of this area. Samuel Thompson served as alcalde of the San Augustine municipality and later organized area churches and schools. Burrell J. Thompson (1790-1875), the eldest Thompson son, came to Texas in 1821 with Stephen F. Austin. He was involved in the Freedonian Rebellion, gave financial aid to the Texas Revolution, and later served three terms as justice of the peace in San Augustine. William Alston Thompson (1795-1837) arrived in Texas with his brother Burrell in 1821. He served in the Texas Revolution and in 1837 was murdered by horse thieves near his home. Napoleon B. Thompson served in a Ranger company during the Texas Revolution. He was district attorney of the San Augustine Judicial District and died sometime before 1850. Charleton W. Thompson (1809-1838) was alcalde at Anahuac, served in the Convention of 1833, and was a member of the Republic of Texas Congress in 1838. John H. Thompson was a participant in the Battle of Nacogdoches. Descendants of the pioneer Thompson family still remain in San Augustine County. Texas Sesquicentennial 1836-1986