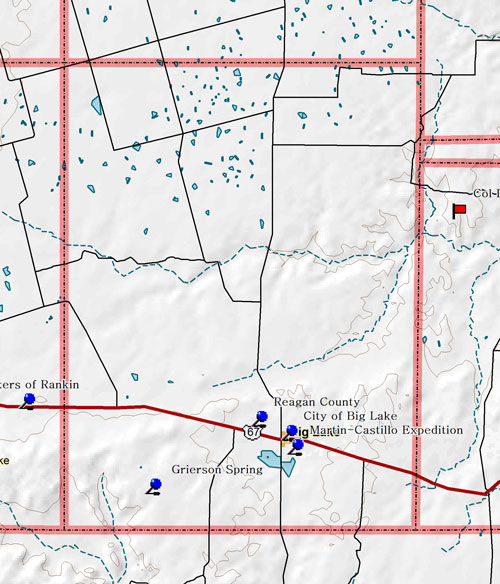 Marker Title: City of Big Lake
Address: US 67 & SH 137
City: Big Lake
County: Reagan
Year Marker Erected: 1967
Marker Location: Intersection of US 67 and SH 137 in Big Lake
Marker Text: The land on which the original townsite of Big Lake was located was owned in 1903 by T.H. Taylor who sold 320 acres to the Orient Land Company, which agreed to build a railroad station and lay out a town to be called Big Lake. The city took its name from a lake created by rain which gathers in a natural land depression about one and one half miles from here. Once filled by spring-fed water, it is now the largest dry lake in Texas. In pioneer days it was the only known fresh water between the Concho River and springs at Fort Stockton and was a campsite for Indians, Mexican traders and cattle drivers. Oldest house in Reagan County, the John Gardner house, is located near its banks. The town was established in 1911. Its first economic activity was a stockpen built by the Kansas City, Mexico & Orient Railroad, a hotel, and a grocery store. It grew up around the line of the railroad, and by 1915 had about fifty families. Big Lake was incorporated on May 28, 1923, and in 1925 became the seat of Reagan County. Land additions were made in 1914 and 1925. Today the city is a center for the oil and gas industry.

Marker Title: Martin-Castillo Expedition
Address: US 67, Main and 2nd Streets
City: Big Lake
County: Reagan
Year Marker Erected: 1970
Marker Location: US67 at corner of Main and 2nd, Big Lake
Marker Text: Explored the Concho River, 32 miles north of here, gathering information on Jumano Indians and searching for pearls, 1650. Setting out from Santa Fe, Capts. Hernan Martin and Diego Del Castillo traveled about 600 miles to the Jumano territory, where they stayed for 6 months. Further travels took them to the edge of the Texas nation, where they obtained the first information definitely about the tribe that gave Texas its name. The "discoveries" of their journey -- pearls and the Texas nation -- sparked later important Spanish expeditions to East Texas.