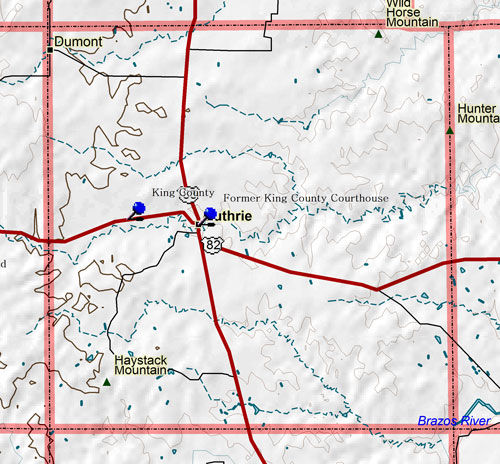 Marker Title: King County
City: Guthrie
County: King
Year Marker Erected: 1965
Marker Location: from Guthrie, take U.S. Highway 82 west, about 2.4 miles to roadside park.
Marker Text: Created August 21, 1876, from Bexar County, whose diamond-shaped boundaries extended from the Rio Grande to the Panhandle to El Paso. Named for William King, who died at the Alamo. Chief industry, ranching, is reflected in its famous cattle brands: "6666", "Pitchfork", "S M S" and "Matador". A population of only 173 in 1890 was aided in formal organization by petitions signed by itinerants. Names of favorite horses were also added. Organization came on June 25, 1891. In establishing county seat, cowboys voted for Guthrie, which won over Ashville, choice of the ranchers. (1965)