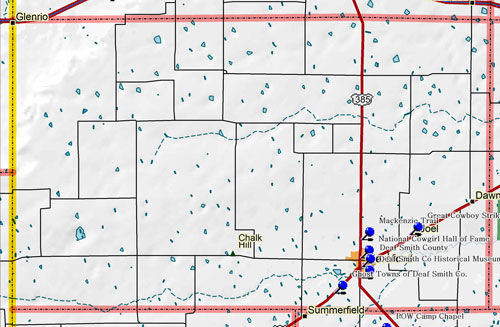 Marker Title: Great Cowboy Strike, Site of
County: Deaf Smith
Year Marker Erected: 1967
Marker Location: US 60, 5.5 mi. N of Hereford
Marker Text: (2 miles south) Began in Spring of 1883 when range hands from LS, LX, LIT and other large ranches organized a strike for better wages; was a reaction to loss of privileges given earlier and to attitude of big land owners toward cowboys. Several hired hands gathered at Alamocitos, headquarters of LS, to protest. Men on every ranch soon asked for higher pay, but strike failed due to surplus of cowboys and no means to enforce demands. Strike gave force to little men opposing cattle barons and three years later erupted in Tascosa into one of the bloodiest gun fights the West had ever seen. (1967)

Marker Title: Mackenzie Trail
City: Hereford
County: Deaf Smith
Year Marker Erected: 1965
Marker Text: Along this lonely, arid trail Gen. Ranald S. Mackenzie led his troops on scouting forays in the 1870s. Known for bravery and skill as a Civil War officer, he was sent to Texas and quickly adjusted to dangers and problems of frontier fighting. He fought against Comanches at Blanco and Tule Canyons. On Sept. 28, 1874, in Palo Duro Canyon, he led his men in one of the last major Indian battles in Texas where he slew more than 1,000 horses to cripple Indian action; thus he helped bring peace to the Texas Panhandle, making it safe for settlers. (1965)