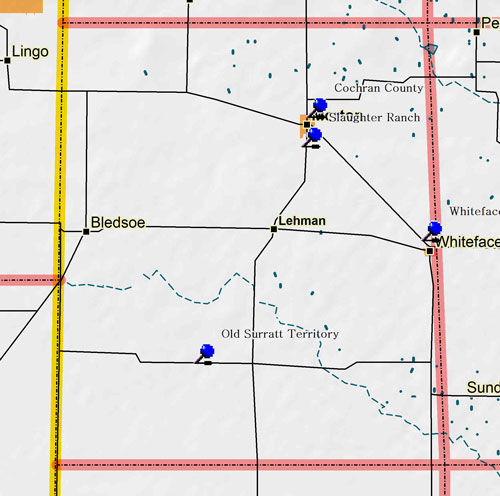 Marker Title: Cochran County
City: Morton
County: Cochran
Year Marker Erected: 1936
Marker Location: at Courthouse Square, North Main Street-Morton
Marker Text: Created August 21, 1876, from Bexar County. Named for a native of New Jersey, Robert Cochran, a private who died for Texas Independece in the siege of the Alamo. Indian hostilities and the distance to market and supplies made settlement slow. The 1900 census listed 25 cowboys. In 1910 there were 75 persons; then 67 in 1920. Organized May 6, 1924, with Morton as county seat. Oil discovery and development of irrigation caused rapid growth, and made it a farm and petroleum center. Site of Silver Lake, a saline lake known to early Spanish explorers as Laguna Quemado. (1965)

Marker Title: Slaughter Ranch
City: Morton
County: Cochran
Year Marker Erected: 1962
Marker Location: from Morton take Highway 214 south about 2 miles; turn west onto Highway 1169 about .5 miles to driveway-drive south to site.
Marker Text: Made up of 246,669 acres of Cochran and Hockley county lands. Col. C.C. Slaughter -- a leader in banking, ranching and religious life in Texas -- purchased land 1898-1901. First headquarters was a half-dugout. In 1915, C.C. Slaughter Cattle Company, Inc., brought men from Mexico to build this adobe and concrete quadrangle, on order of a Spanish hacienda. This was one of finest Texas ranch buildings of its era. Recorded Texas Historic Landmark - 1962

Marker Title: Old Surratt Territory
City: Morton
County: Cochran
Year Marker Erected: 1999
Marker Location: 17.4 mi. S of Morton on SH 214; 2.5 mi. W on FM 1585 (S side of road)
Marker Text: Once encompassing more than 33,000 acres, the area known locally as the Old Surratt Territory is representative of the late-19th century settlement and ranching history of the vast grasslands of the Texas Panhandle. Marshall Surratt (1849-1927), an East Texas native who settled in Waco and became a prominent attorney and district judge, purchased the 53 sections of land in 1885. Although the territory was known by his name, Judge Surratt never lived in Cochran County; he leased the acreage to the Jumbo Cattle Company. Operated by brothers Nick and John Beal and John Beal's brother-in-law, F.G. Oxsheer, the Jumbo was one of a number of large ranching operations, including those owned by such famous cattlemen as C.C. Slaughter and George Littlefield, that thrived despite several years of winter blizzards and summer droughts. Wells and windmills were located throughout the Surratt Territory to provide reliable water sources for the herds of cattle roaming its plains. The early history of Cochran County settlement is the history of its ranching. The census of 1890 revealed no permanent residents; in 1900 ranchers working in the county accounted for its population of 25, and by 1920 the figure had risen to 67. As free range ranching gave way to the fenced pastures of large syndicates and smaller family farms and ranches, the once vast ranch lands were divided. These smaller operations resulted in a division of lands and a surge in population, as reflected by the 1930 census figure of 1,963. Purchased by a succession of absentee landowners after 1900, the Surratt Territory remained intact until 1953. (1999)