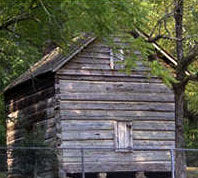 When Fort Yargo was built, this area was on the outskirts of Georgia's frontier, and actually inside Indian Territory.

The western push of settlers from the Georgia coast had slowed during the Revolutionary War, but not long after the war ended, settlers once again began to encroach on Creek land. Near the Creek town of Snodon settlers created tiny Jug Handle, essentially a tavern and inn at the intersection of a heavily traveled north-south Indian Trading Path and an east-west trading route.

To protect the settlers from the Creek Indians, Fort Yargo was built in 1792 by a Virginia settler living in the present-day Jefferson area, Captain Joseph Humphries, who is noted as a county clerk, justice of the peace, and inferior court judge. There were no Cherokee towns in this vicinity as it is several miles from the Creek-Cherokee border.

Included in the Fort Yargo historical site is the Will-a-way Recreation Area, which actually covers most of the 1,800 acres of land the park encompasses. It is built around the centerpiece 260-acre man-made lake, created by damming Marburg Creek and its tributaries. There are 40 general camping sites, 7 "walk-in" sites for people who are willing to pack in their food, tents and bedding, tennis courts and both pioneer and group camping shelters.

There is an easy hiking trail around the lake fishing is allowed as there are two boat ramps.

Follow directions to Old Fort Yargo, but continue north for 3 miles. Entrance to the park is on the right.