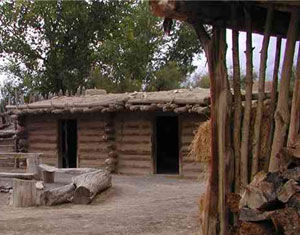 Fort Uncompahgre (un-come-paw-gray) was first established as a fur trading post around 1826 by Antoine Robidoux near the present sight of Delta, Colorado. Fort Uncompahgre today is a living history museum that recreates the sight, the sound, the feeling and the experience of visiting the original post.

Antoine Robidoux was born in St. Louis, Missouri in 1794 and was a member of one of the most influential families in the history of the west. As a young man, Antoine became involved in the fur trade. He established Fort Uncompahgre a short distance from the confluence of the rivers Uncompahgre and Blue or Eagle Tail (now called the Gunnison River). One account of the old Fort describes it as “a few log buildings enclosed in a quadrangle of pickets.” Furs were brought to the Fort and traded for goods that had been brought in from both the United States and Mexico. The Fort remained in operation until September 1844, when most of the occupants were killed in an attack by the Ute Indians.

When you visit Fort Uncompahgre today, you will be greeted by interpreters clothed in appropriate period attire and given a “hands-on” guided tour through the past, where every aspect is maintained as authentically as possible.

Open for school tours April, May, September, and October, closed Sunday. The fort is open Monday-Saturday, 8am to 5pm.