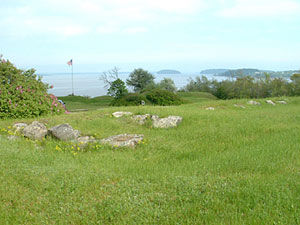 Fort O'Brien (Fort Machias) was built in 1775 and destroyed by the British in the same year. This state historic site is one of few Maine forts active during three wars - the American Revolution, War of 1812 and Civil War. Fort O'Brien's layout was altered several times over the 90 years it was active on this site. But the fort's important role in protecting the Machias River and its towns remained unchanged.

It was refortified in 1777 and destroyed once again by the British in 1814. Well-preserved earthworks which overlook Machias Bay were erected for a battery of guns in 1863. The first naval engagement of the Revolution was fought off-shore in 1775, five days before the Battle at Bunker Hill. In 1923, the United States Government deeded the site of Fort O'Brien to the State of Maine. First administered as a State Historic Site in 1966, it is maintained by the Bureau of Parks and Lands.

Five miles from Machias on Route 92